Will escape still be possible? 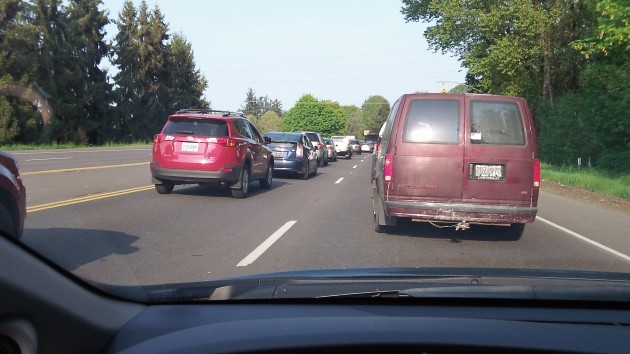 Technology will make it possible to keep track of where vehicles are. (These were stuck in a slowdown on Highway 20.).

July 1 is an important date not only because Oregon now allows the “recreational” use of marijuana but because it also is a milestone on the road to total surveillance. So far this surveillance covers only volunteers. But in 10 or 20 years, I doubt escape will be possible for any of us still around.

Oregon is starting its road user charge program with the volunteer owners of up to 5,000 vehicles. (I signed up my truck and expect to hear shortly whether it’s accepted.) In return for paying 1.5 cents per mile driven on public roads in the state, participants will get a refund of the state gas tax.

Volunteers have the choice of three wireless options to keep track of their mileage. One is available only to participants in an insurance-per-mile program. Another keeps track of the odometer but not where the driver has been. (That’s the one I picked.) It’s the third option that sounds ominous from the standpoint of where technology leads.

“Choose the Azuga option and you’ll have access to a number of valuable connected-car enabled services,” the invitation purrs. What are they talking about, in addition to the road user program?

Well, for example, the system will provide “visual trip logs” that “remember everywhere you’ve been so you can share it with friends and get there again.” Seems to me that if you want others to know where you’ve been, you can just tell them about it. Facebook is full of information like that.

This application, though, will do more. “See details about your trips like duration, cost and carbon footprint.” Think ahead a few years when, the way we are headed, the government will want to force people to reduce their carbon output. What better way to enforce those future regulations than to require all vehicles to report the carbon footprint of their use to the Bureau of Carbon Reduction?

But there’s still more. “Make it a game,” Azuga suggests. “Earn badges that unlock for good driving behavior. Compete with friends and family to see who can unlock the most badges. A great tool for drivers to stay engaged and connected with their driving.” Sure, and also a great tool for a future Environmental Behavior Iimprovement Administration (EBIA) to keep track of who is toeing the line and who is being reckless with the future of the globe. All they have to do is to mandate, in the name of public safety and health, the installation of Azuga-type monitors in every new vehicle, kind of like seat belts and air bags.

Just to make sure hapless citizens of the future don’t wander off their assigned reservations, the authorities will also be interested in “Safe Zones,” another Azuga service the company describes thus: “Offers peace of mind that anyone driving your car (such as a teenager) is safe by allowing you to set up geographical zones and be notified when the vehicle has crossed those zones.”

Who needs surveillance cameras everywhere, or identity chips implanted at birth, when the people in charge can make sure nobody crosses any of the lines it will draw? None of this can happen, you say? Maybe not now or next year. But as fast as the country is changing and old principles are tossed out, who can be sure about what’s ahead? (hh)


5 responses to “Will escape still be possible?”