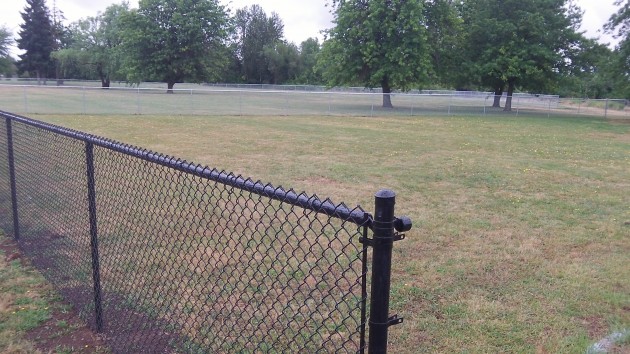 The dog park fence is still unfinished, waiting for gates that may be installed next week.

Albany’s first fenced dog park is taking shape, but not without controversy. A representative of the Northwest branch of the Familiy Motor Coach Association has complained to the city that the dog park takes up space the association had used to park 100 motor homes during its rallies at the Linn County Fair and Expo Center. He implied that the dog park jeopardized holding future rallies in Albany.

A contractor for the Albany Parks Department has been installing the dog park fencing on the north side of Timber Linn Park. Parks Director Ed Hodney says the contractor, University Fence, is waiting for a delivery of gates to finish the job, which is expected to happen next Wednesday. According to him, the contract amount was $24,000, the lowest of three bids and substantially below his previous estimate that the fencing would cost around $40,000.

The fencing put up so far appears to create two separate areas, one bigger than the other. Hodney told the city council Wednesday that one area will be for small dogs, the other one for big ones. In either one, owners can let their dogs run off leash. 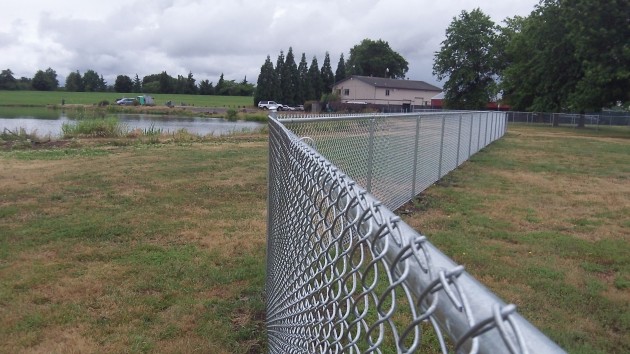 The back fence of the dog area is near Timber Lake.

The dog area is directly across S.E. Dogwood Avenue from the graveled portion of the parking lot of the Linn County Fair and Expo Center. The motor home complaint surfaced at the city council meeting Wednesday, when Councilor Rich Kellum said Linn County had not been informed of plans for the dog park fencing ahead of time. Hodney agreed with Kellum that communication between his department and the Expo Center on the dog park issue could have been better. But he also said the fenced area takes up only two acres of a 12-acre section of the park, leaving 10 acres still available for parking if needed.

In a letter to Mayor Sharon Konopa and Hodney, Andy Balogh of the motor coach association said he had noticed the fencing when he went to the Expo Center to work out a “multiyear contract” to hold rallies there. “With the loss of this parking area, it has now become a challenge to sell to the Northwest Area Executive Board and our members a reason to return to Albany for out Northwest Rally,” Balogh wrote. He added that the rallies mean $1.5 million to the economy where they are held.

Expo Manager Randy Porter said today (June 26) that no decision about scheduling a motor home rally at the center has been made.

On Wednesday, by the way, to make dog parks legal in Albany, the city council amended the city code to authorize the parks director to designate or approve areas where dogs may be off leash. Otherwise, the law requires dogs to be leashed any time they are in public anywhere in town. (hh)