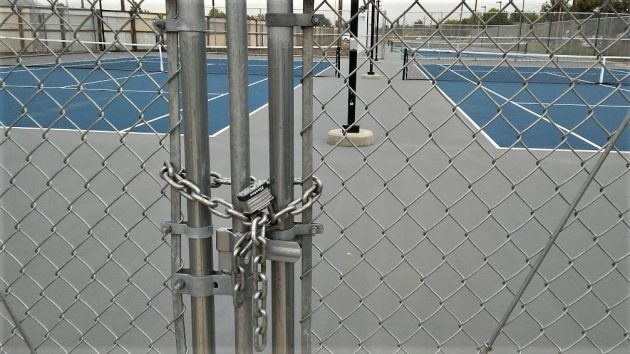 On Aug.16, a lock and chain made sure no one got through this gate at the new tennis courts of West Albany High School.

The weekend before last, you could get in and practice your tennis on the new courts at West Albany High. Now you can’t because the place is locked up tight, and here’s why.

An Aug. 8 story on the courts on hh-today scored a response a few days later from reader Molly Miller. “I’m glad the courts were being used,” she wrote. “But the light poles in the courts pose quite a hazard for anyone playing a game of tennis.”

The biggest hazard, in her opinion, was posed by poles between the two courts that are side by side. “Those hard metal poles in the middle of what is a playing area are accidents waiting to happen.”

I don’t know if she was the only one to point this out, or if others made the same argument to the school or district. In any case, the American Sports Builders Association has this to say about side space on tennis courts: “Not less than 12 feet is required from the side line to a fixed obstruction (i.e. sidestop, light pole, wall, etc).”

Based on the doubles and singles side lines, which are 4.5 feet apart, the poles between the courts at West, as you can see below, are about 6.4 feet from the outside lines, about half the required minimum. 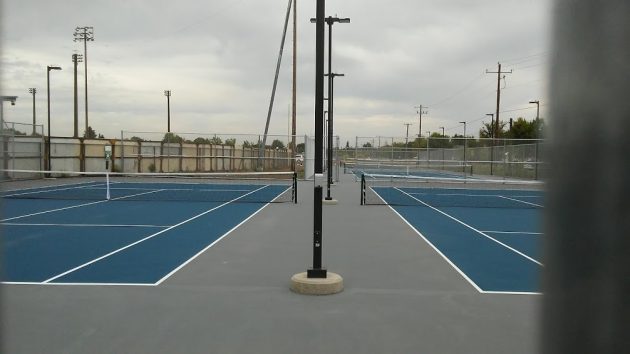 I asked spokesman Andrew Tomsky of the Greater Albany Public Schools about this. “The information I’ve received,” he replied, “is that the lights are being relocated at the architect’s expense, and the courts will be locked until that happens.”

Another response came from David McKay of HMK Company, the owner’s representative overseeing all the school district’s renovations and new construction, of which the courts at West are a part.

“The school district appreciates the player safety concerns that have been raised in regard to the lighting pole placement …,” McKay emailed me. “A plan is in place to remove the two poles that are located at the corners between the paired courts (and are obstructing play) and retrofitting the already installed pole at the center court with four lights to illuminate both courts. The tennis courts have been secured and will not be used until the safety concerns are addressed.”

I wondered about the cost of the courts and the expense of the fix. But the overall cost is part of the entire West Albany expansion project — some $62 million — and not readily broken out. As for the repair, McKay said they’re seeking pricing of that and hope to get it in the next two weeks. (hh) 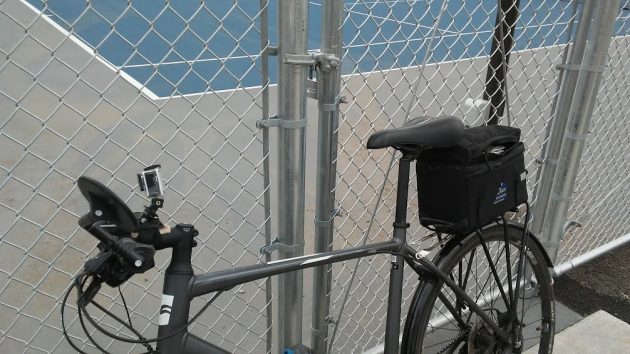 The back gate was secured as well.

12 responses to “Why West’s new courts are locked again”