Why we don’t charge cyclists more 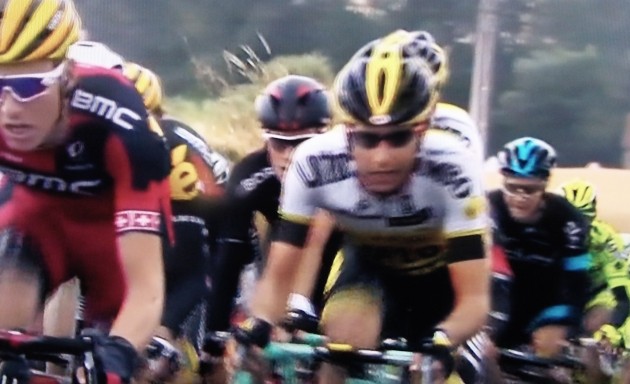 Riders race across northern France on Wednesday (as seen on NBC Sports), not at all interested in who pays for Oregon bike facilities.

Proposals to tax and even license bicycle owners and riders got nowhere in the 2015 Oregon legislature because they were bad ideas, too impractical even for lawmakers who usually don’t mind sticking their fellow citizens with higher fees.

These proposals keep coming back, though, because there’s a myth that unlike every other group of citizens, bike riders somehow get a free ride they don’t deserve. Consider, for example, the email that arrived a few days ago from a reader prompted by the current ODOT project to extend a multi-use path alongside Highway 34 east of Corvallis: “I’m wondering why all of the taxpayers have to pay for a path that only a few people will use? Why don’t the bike riders have to pay fees of any kind and expect roads to be provided for them to use while 99.8 percent of the taxpayers are forced to pay for them without even getting to vote on the subject?”

Well, like most public services, bike facilities that are part of our transportation system are available to anyone who needs or wants to use them. That’s why in Oregon we have required, since the 1970s, that bike and pedestrian facilities be part of any major street, road or highway project. (Nobody ever seems to call for a special tax on pedestrians just so they don’t have to walk in the traffic lanes.)

And we did get to vote on this issue, sort of. In 1980 we adopted a constitutional amendment restricting the uses of the state highway fund to roads (unwisely cutting the state police out of that funding source) and the courts have confirmed that roads include bikeways and walkways in the right of way.

Further, while we pay for much of our highway costs through the gas tax, we don’t pay all the costs that way. For the 2013-15 biennium, 20 percent of the $2.6 billion Oregon highway fund came from federal sources (including general revenues because the federal gas tax is not enough), and 21 percent came from the proceeds of borrowing.

Of the total transportation revenues of more than $6 billion, only about $1 billion came from the state fuels tax. Some $661 million came from driver and vehicle licenses. Almost all bike riders have paid for a driver’s license and to register a car or two. So when they roll along under their own power on two wheels, they are paying the state even while their vehicles sit in the garage. (hh)

2 responses to “Why we don’t charge cyclists more”