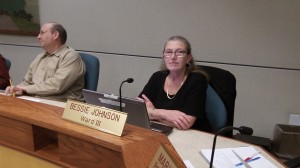 Councilwoman Bessie Johnson has been pushing to keep pot dispensaries out.

A majority of the Albany City Council seems determined to keep illegal marijuana growers in business. How else to explain their effort to circumvent the state law that is intended to allow medical marijuana dispensaries to operate under strict state supervision with a long list of safeguards against abuse?

Four city council members (Rich Kellum, Floyd Collins, Bill Coburn and Bessie Johnson) voted on Dec. 11 to direct the city staff to draft and initiate a change in land use regulations that would have the effect of barring dispensaries regardless of the state rules.

Albany’s proposed code amendment would bar any land use where drugs illegal under state or federal law are transferred. Even though medical marijuana has been legal in Oregon for years, the federal government still considers it illegal. In Oregon, though, it’s not enforcing the federal ban.

Law enforcement officials have recently warned against dispensaries. For years they’ve been opposed to legalized medical marijuana too, but on that issue the voters and the legislature have overruled them — or so one would have thought. A number of cities now want to exempt themselves from the law, and Albany may become one of those.

The biggest problem with medical marijuana has been that some big-time growers abused the law, and a few got busted. To shut them down, the legislature did the right thing with its dispensary law, and Albany officials should be held accountable if they thwart that good intent. (hh)