Why those three big trees were felled 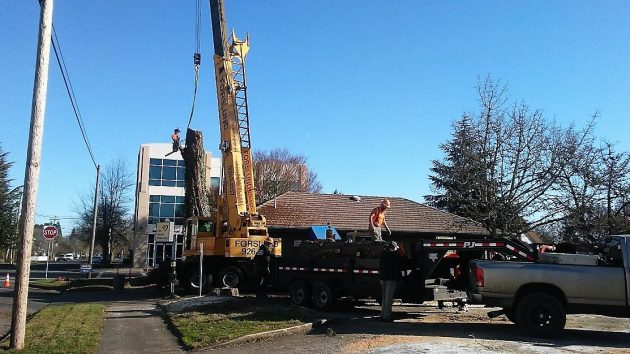 The crew used a crane to lower cut sections of the cedar closest to the Elm Street Pharmacy Sunday.

If you’re wondering why three stately conifers in Albany’s Broadway Neighborhood are no longer there (and even if you’re not), the city’s online register of building-related permits has an answer.

We came across the scene around mid-day Sunday. One of the trees near the Elm Street Pharmacy at Seventh and Elm was already gone, the second was mostly down, and the third was next in line for the chainsaw.

One of the crew from Santiam Tree Service told me the tree closest to the pharmacy building, a cedar, had rot inside, which canceled the property owners’ hopes to have the log milled.

An undated application to remove the three large trees is on file with the Albany building division.  (I found it using the BuildingEye feature under the community development department at cityofalbany.net.) It says the trees were originally planted as part of the landscape but doesn’t say when.

One was a Norway spruce that had “structural issues and poor health.” The second, an incense cedar, was “very close to and damaging the building, both foundation and roof.” That’s the one with the interior rot, as I understand it, and if it had failed it would have been a major hazard to the building and presumably people inside or walking by.

The third, also an incense cedar, had a “very large wound from cars hitting it.” It also was in “poor health.”

The permit specified as a condition of removal that the city forester, Rick Barnett in the parks department, be notified at least a week before the tree felling “so he can make sure that (the city) tree commission and others that see these large trees removed know why.”

In case you didn’t get the word and wondered why the trees were cut, now you know. (hh)


7 responses to “Why those three big trees were felled”