Why these street trees have to go

You can see how these trees on Washington Street have been trimmed over the years to clear the power lines.

The day before Thanksgiving, a couple of signs caught my eye. They were attached to two trees in the 500 block of Washington Street.

I got off the bike for a closer look. This is what the signs said: 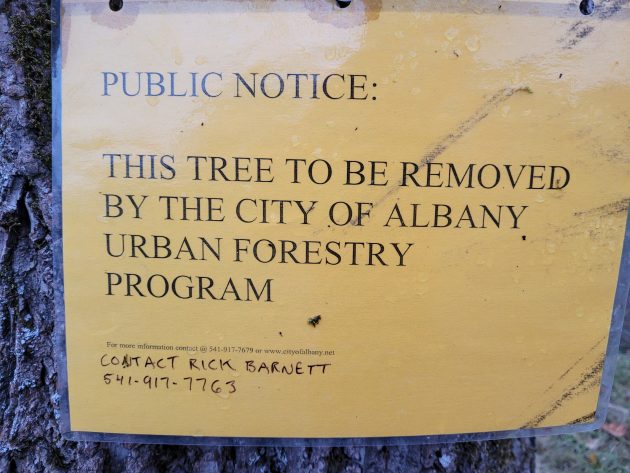 This section of Washington Street is in the heart of the Monteith Historic District, and many of the street trees there are pretty old. Seems like a shame to remove mature trees that add to the visual character of that part of town, I thought.

The trees in this case are black walnuts, and Barnett thinks they are somewhat less than 100 years old. But he’s guessing and says they might be older. The house they stand in front of dates from 1867.

The layman might not be able to tell, but Barnett says these two trees are in very bad shape. Time and again they have been trimmed to keep the upper limbs from interfering with the overhead power lines.

Pacific Power and the homeowner asked for the trees to be removed, Barnett told me. The power company plans to do the removing and is working with the city to replace them with trees better suited to the location under the wires.

“Over time we will likely see more issues on Washington as there are some really large street trees,” Barnett wrote in an email. ” Several have been badly impacted by power lines.”

It’s too bad that mature but weakened trees on Albany streets sometimes have to be cut down. But it can’t be helped, for the alternative is to wait until a massive limb comes crashing down on somebody’s car. (hh)


4 responses to “Why these street trees have to go”