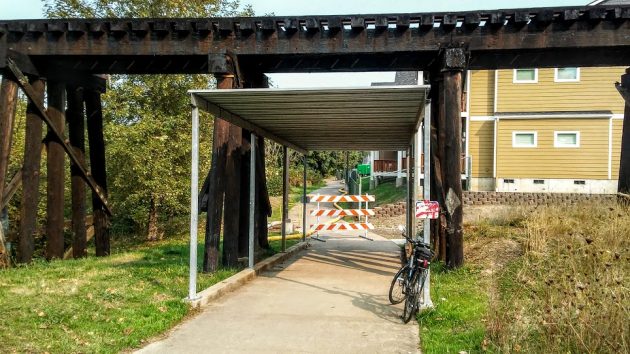 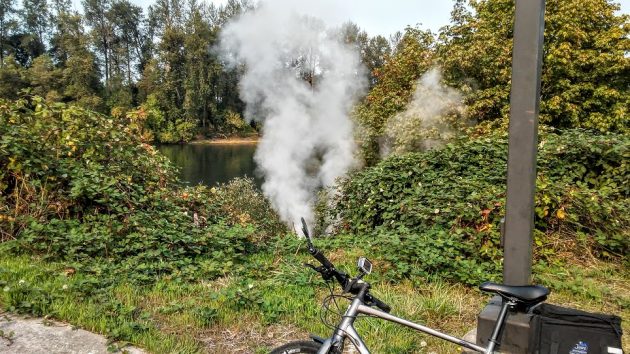 Steam erupts from a manhole in the brush on the bank of the Willamette River. 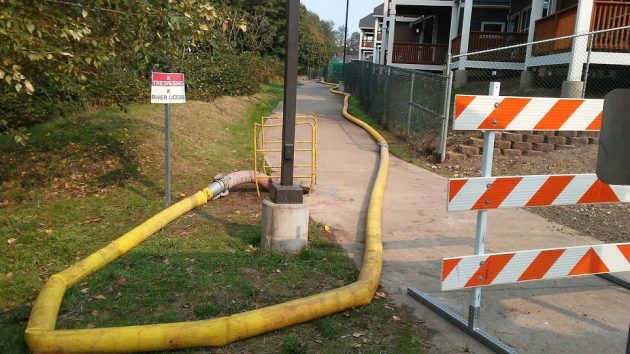 A hose runs along the path, presumably pumping steam into the underground sewer.

What path users are witnessing, if they can get past the barricades, is the work of installing a “pipe within a pipe” in the Riverfront Interceptor, the city of Albany’s oldest big sewer main. It  was built in the 1950s and serves about 2,600 acres in the central part of town.

In April, the city council awarded a contract to rehabilitate this important sewer main to Insituform Technologies of Chesterfield, Mo. The company submitted a bid of $1,626,929, the lowest of three.

As its name implies, Insituform uses a process known as “CIPP” or “cured-in-place pipe” in order to repair aging pipelines without having to dig them up.

It works this way: A felt tube impregnated with resin mixture is fed into and adheres to the old pipe to fix any defects, like holes or cracks. Then steam is pumped in to cure the resin. That explains the plumes of steam coming from the riverbank on Wednesday. The steam has to come out somewhere, and it evidently escapes up manholes.

Then, a robotic device is sent through the pipe to cut holes where laterals come into the main line.

The current work is the second phase of Albany’s Riverfront Wet Weather Lift Station project. The first and main phase was to build a pump station and sewer main along Water Avenue from Montgomery Street to the treatment plant. The point of that is to take the load off the old interceptor during heavy wintertime rainstorms and prevent sewer overflows to the river.

Funding for both phases came from a $13 million low-interest loan by the state Department of Environmental Quality.

It may be an inconvenience to have the riverside path blocked temporarily by this work. But if they had to dig up the old pipeline to fix or replace it, that would take much longer and be worse. And cost way more as well. (hh)

2 responses to “Why there’s steam erupting off Clark Path”