Why the red pavement? The answer is here 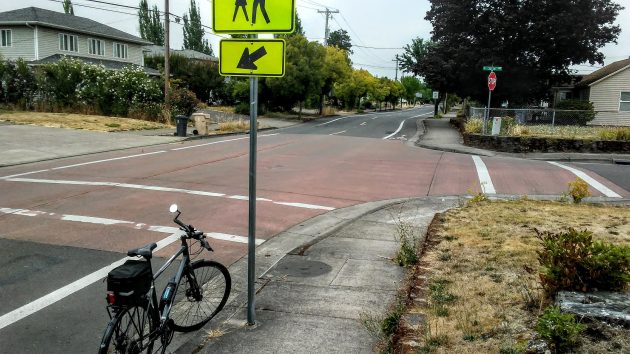 On Marion Street at 30th Avenue on Saturday afternoon. The color has faded.

A reader asked about the red sections of pavement on an Albany street. Why are they there, she wanted to know.

After a bit of uncertainty about which street she was asking about, it turned out that Marion Street south of Queen Avenue was the street she had in mind.

For answers to street questions, I usually turn to the Public Works Department at City Hall, and once again that worked this time.

Chris Cerklewski, an engineer in Public Works, remembers that on Marion Street between Queen and 34th Avenue to the south, “there are a few intersections that were built with red colored concrete.”

The street, a former county road, was widened and improved to city standards, with curbs and all the rest, in the 1990s. (One part was done in 1998, the rest either before or after that.)

So why the colored concrete at the intersections and a couple of other spots?

“My recollection is that this was a Guy Mayes idea to help with traffic calming,” Cerklewski said. (Mayes was another engineer in the department then.) “I think those intersections are also raised intersections, and they also have a horizonal chicane.  The speed bumps on the concrete portion of Marion are also red concrete, again as additional traffic calming. ”

Chicanes are formed by curbed islands in the middle of the street, forcing drivers to steer around them and slow down.

I hadn’t been on Marion Street in a while, so the bike and I went that way Saturday afternoon.

Traffic was light to non-existent, so whether the raised red intersections had any calming effect on drivers was impossible to tell.

What was clear was that after more than 20 years, the original red has all but faded away. It now looks more like an aging mixture of gray and pink. (hh)


2 responses to “Why the red pavement? The answer is here”