Why the public has not panicked over corona 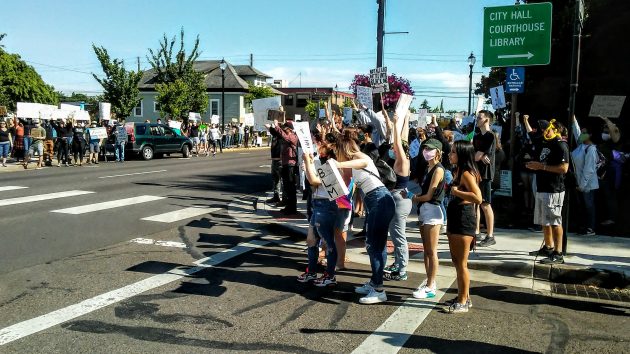 People at the June 2 demonstration in Albany did not seem frightened by the coronavirus outbreak.

Albany Councilman Rich Kellum wishes the media more often reported details about the corona crisis in addition to the daily toll of added cases and deaths. And there is more to report, all of it readily available in the data the Oregon Health Authority publishes online.

Kellum made his point at the end of the city council’s work session on Monday night. He’d like, for instance, to see reports on how many people stricken by the virus have regained their health.

On that, the public already has the basic idea. Lots of people in Oregon got the illness. More than 10,800 of them, at last report. And the death toll was 224. So roughly 10,600 have survived so far, and except for the few who will yet succumb, the vast number have recovered or are on the way.

The Health Authority has many other numbers in its website. Statewide, coronavirus cases have amounted to about 25 per 10,000. Of those who got it, the death rate has been 2 percent.

Statewide, the level of corona testing is up to 651 persons per 10,000 population. Ninety-six percent of the tests have come back no corona. In the other 4 percent, the virus turned up.

In Linn County the numbers are comparable: 165 cases in a population of 126,000; 78 recoveries, 157 positive tests (no explanation why that number is slightly different from total cases), and 7,158 negative tests.

The numbers explain why people in the mid-valley, while many suffer economically, are not in a panic about their health despite the drumbeat of corona news. The numbers show  that — perhaps because of all the precautions and restrictions, perhaps for other reasons as well — you were not likely to catch the virus, and in the unlikely event that you did, you were almost sure to survive. (hh)

I’ve edited the story to take out a sentence about recovery statistics because it was wrong.


14 responses to “Why the public has not panicked over corona”