Why the path would be better 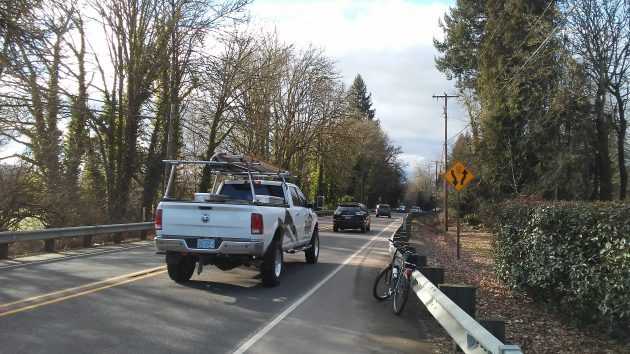 Cycling west on Highway 20 toward Scenic Drive: This is where it gets hairy.

A day after the Albany City Council narrowly confirmed its longstanding commitment to an off-highway bikeway from Spring Hill to Scenic Drive, I got on my bike and took another look at how things are now.

The proposed Albany leg of the Albany-Corvallis Bikeway follows Hickory Street from Spring Hill to the end of Hickory about a quarter-mile west of North Albany Road. From there, the proposed alignment, though not totally nailed down, would go west along the south side of the Portland & Western track, then duck under a trestle to the north side of the track and follow West Thornton Lake Drive to Scenic.

Cyclists and pedestrians can cover the same 6,000-foot distance now, either on West Thornton Lake Drive, which winds up and down and sideways and has no shoulders to speak of, or on the highway itself, where the motor traffic comes in high-speed bursts. On 20, as the photo above shows, west of Rainwater Lane the shoulder narrows to three or four feet before a right-hand curve. It takes nerve to ride through there, hoping that all the drivers are keeping rigorously to the left of the fog line. 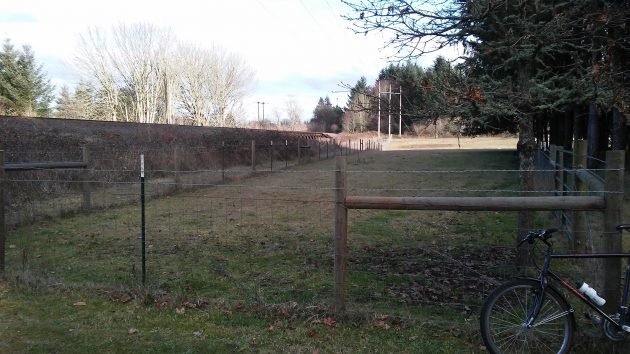 The proposed path would come through somewhere along here near the north end of Juniper Lane. 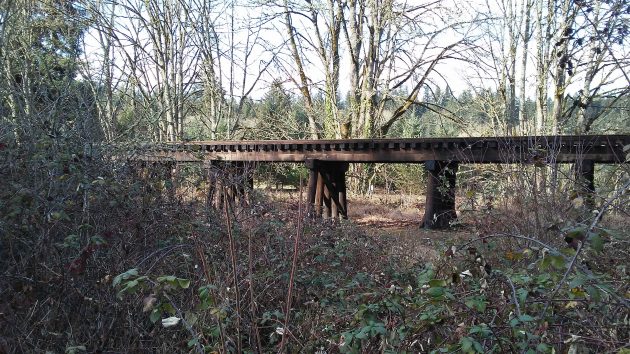 Then the path would cross to the north side of the track under a trestle west of this one.

Assuming that the remaining right of way can be acquired and no other obstacles arise, the Oregon Department of Transportation intends to construct the Albany path in 2018 at an estimated cost of $2.7 million.

After looking at what’s there now and what’s proposed, I’m more convinced than before that the path is a good idea for both transportation and exercise, especially if it connects to a route covering the rest of the way to Corvallis. It would encourage more people to move along under their own power. On this route, they would not have to worry about being mowed down from behind by somebody checking his phone at 50 mph. (hh)


6 responses to “Why the path would be better”