Why the ‘blessing box’ is gone 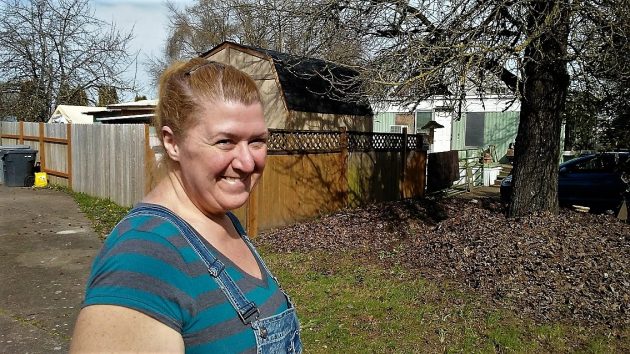 Christine Withers Rayburn talks about the demise of her “blessing box” Monday. (Watch the video below.)

It began as a private project to help people in need. But it became a nuisance and even a threat to the woman who started it. So now her “blessing box” is gone.

Christine Withers Rayburn set up the box about two years ago outside her home on Salem Avenue. First it was just a box. Then she upgraded it to a plastic storage cabinet and filled it with things that might be helpful to the down and out: Food, clothing, items for personal hygiene and grooming, even toys — all kinds of stuff, free for the taking.

A reader noticed the box was gone and asked me about it. On Monday afternoon, the bike took me past the place and I chatted with a neighbor just as Christine drove up. Yes, she said she and her husband decided to take the box down because of the problems it was causing. She kept it empty for a couple of weeks and then, last week, got rid of the box itself.

People would come on to her place very late or in the middle of the night. Things would disappear from her and the neighbor’s property. There would be drinking. One time she was threatened with a knife. She thought the guy was on drugs. I asked her who these troublemakers were. They were among the very people she was trying to help. Not all of them, of course, but enough to be a pain.

So the box in front of her place is gone. But she’s still helping. She is volunteering for Fish, which provides emergency aid to people in need, and the Helping Hands homeless shelter. She has made up “blessing bags” filled with food like top ramen and other things, and she hands them to people she sees around town.

I last talked to her some time ago. Since then she has found work as an in-home caregiver, and her husband, a millwright, works as well.

Christine is not dismayed. She is as cheerful as ever. But she has this advice: If you are thinking of having a blessing box like hers, go ahead but don’t set it up outside your home. (hh)


7 responses to “Why the ‘blessing box’ is gone”