Why state of Jefferson won’t happen 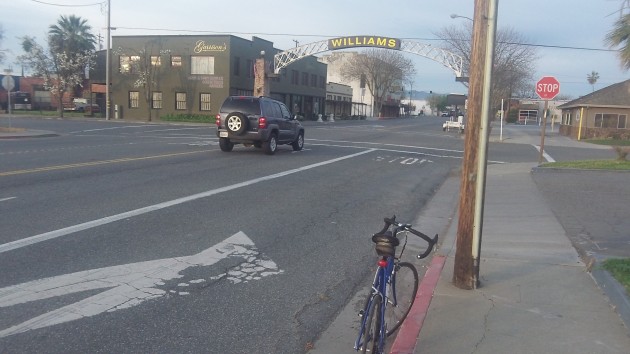 Williams, CA, where the ardor for Jefferson state has cooled.

One Sunday morning in March I took a short bike ride around the little town of Williams in Northern California’s Colusa County, and I became aware of a proposal before the city council calling for the formation of a new state, the state of Jefferson. What happened there since illustrates why nothing will  happen to make that pipe dream real.

When I last wrote about this, the Jefferson declaration — asking the Assembly to support splitting several northern counties from California and having them form their own state — was on the Williams City Council’s next agenda. As it turned out when the day came, council members weren’t too sure about the idea and put off action pending a public town hall meeting a few days later.

The matter came up again in April, and the council still wasn’t sure and tabled the Jefferson idea. Members doubted whether many people in town actually wanted to leave California and form their own state. Evidently there was no groundswell of public opinion.

One council member was worried about state funding and whether state grants would still be available, according to a report in the online Williams Pioneer Review. The story didn’t say, but it’s a safe bet that Sacramento would make no state grants to any new state of Jefferson.

The boards of supervisors in eight northern California counties have voted for a split and a new state, and so have the councils of several towns. But what they really want is for the legislature in Sacramento to pay more attention to their needs, which differ from those of the urban axis that controls the Assembly and all state politics. For example, rural areas don’t want the state public utility commission to order higher electric rates to pay for electric vehicle charging stations to meet California’s green-energy requirements, which do the outlying areas no good.

In Oregon we have a similar situation, with the interests and wishes of Oregonians east of the Cascades and other non-urban areas being routinely ignored. Splitting the state would be one answer, but that idea is just as unrealistic here as talk of the state of Jefferson is in northern California. At this stage of American history, most citizens are just not inclined to take any drastic steps, especially if they would result in the loss of grants. (hh)


6 responses to “Why state of Jefferson won’t happen”