Why pickleball courts have been delayed 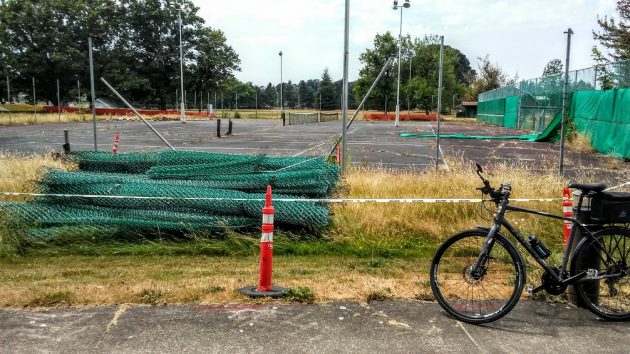 On July 27, nothing had changed at the pickleball construction site since I last looked at it in May. Now we know why.

If you’re among the people in Albany wondering why there’s been no progress on the new pickleball courts at Linn-Benton Community College, this story is for you.

North Santiam Paving of Stayton has a $329,888 contract with the Albany Parks Department to convert the old tennis courts at LBCC to pickleball courts. But little or nothing has happened there since the tennis fences were dismantled in the spring.

A detailed explanation came today from Rick Barnett, parks and facilities maintenance manager for the city.

First, the plans assumed the tennis courts had an asphalt base, but it turned out to be a 6-inch layer of concrete, so solid that it had not moved in maybe 50 years. Tearing it up and starting new with asphalt would have a big cost.

“We chose to tear the asphalt layer off, fix the bite we took out of the slab and build on the slab” Barnett said. “In the end it should be a really good solution.”

Second, the plan was to expand the courts to the south, but the soil turned out to be unsuitable and would require an excavation 18 inches deep filled with compacted rock. Again, the added cost would be steep.

Going with the original plan would have cost an additional $154,000. “So we went back to the drawing board, used the current footprint of the courts and redesigned the court setup,” Barnett said.

Building new courts over concrete is different, so the contractor had to reconsider its cost and the project’s price.

“Between work with the engineers at Reece and Associates, city staff, LBCC, pickleball enthusiasts and North Santiam,” Barnett said, “we were able to come up with a plan that fits into our original cost window.”

All of this took time to work out. Now, the contractor expects to do the work toward the end of August. The goal is to have the new courts ready for play by the end of September, the time the college’s fall term starts if the Covid crisis doesn’t interfere. (hh)


7 responses to “Why pickleball courts have been delayed”