Why park’s lawn is tan: A little story 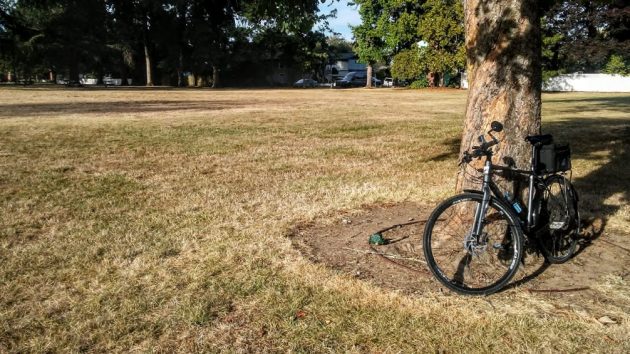 Like many lawns all over Albany, Takena Park has gone mostly tan this summer. Is that a story? Not really, but maybe a little one.

As we heard the other day in connection with public restrooms, the city parks department is laboring under cutbacks. I know from listening to budget meetings years ago that the city parks have to pay for the city water they use for irrigating lawns.

I wondered whether the brownish lawn at Takena had anything to do with trying to save money?

Apparently not, or only a little, I gathered from the response I got from Rick Barnett, the parks facilities and maintenance manager.

“Takena Park not being irrigated,” he wrote, “is related  to an ancient irrigation system that is no longer usable.”

But money plays a role, apparently. “With finances as projected,” he added, “you will likely see less watering throughout the system next year.”

I combed the published city budget for what it costs the parks to keep lawns green each year in the city’s 550 acres of developed park land. But that detail isn’t there. Presumably it’s part of the $1.2 million yearly budget for materials and services in the park maintenance section.

Let’s agree that brown lawns in September (or on Aug. 30, as in the photo above) are no big deal around here. After all, they all turn green again after the first two weeks of rain. (hh)

On Sept. 2 Rick Barnett provided additional background: “We have water rights at Timber Linn and Waverly lakes so those parks are mostly just the cost to pump water. We budgeted $135,000 for water this year along with another $5,000 for stormwater management.

“Before the main watering and mowing season we recognized we needed to save money anywhere we could.  Since less watering means less mowing, our park maintenance workers have been working to be very precise on our watering. We are trending substantially under the budgeted number this watering season.”


5 responses to “Why park’s lawn is tan: A little story”