Why no ties: They bind? 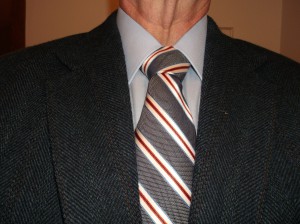 Aaargh! This thing is choking me…

You may have seen the story in the Oregonian, where it first appeared. In a nutshell, Portland State University had arranged to provide formal tailored business suits for each of its 71 football players, and the team wore the suits, complete with ties in the school color green, when traveling to every away game. It reminded me a little of high school in Southern California, where the coach made us players on the basketball team wear dress shirts and slacks — no jeans — every day we had a game.

The story about the Portland State suits prompted Mike McInally, the editor of the Corvallis and Albany papers, to write a column moaning about how rare it is now for men to wear ties. Time was, of course, when men wore ties all the time, no exceptions. My grandfather never left the house without wearing a tie and a dark suit complete with a vest.

I’m not sure what it says that neckties now are hardly worn at all. Maybe it’s that men finally realized a few years ago that the necktie has no useful function, so it seems silly to knot something around your neck that just might choke you. On the other hand, guys do all kinds of other silly things when it comes to garments, like wearing goofy-looking shorts that reach down to mid-calf. So more than likely, the demise of the tie is due to nothing other than a general slovenliness that has spread far and wide.

A few smart people became billionaires even though all they ever wore in public was T-shirts and jeans. So everybody else — not even half as brilliant — figures there’s no percentage in trying to look dressed. (hh)

From: Ray Kopczynski: In my case, you’ll never see me at work or meetings sans tie!  Why?  I’ll admit that I’m “old school,” but if you consider yourself a professional (in any endeavor,) then dress as a professional. Obviously, you can be very professional in many occupations where ties are *never* worn, so my comments are to “white collar” jobs…  As I counsel folks trying to find a job, “How you look DOES matter!”  I don’t say that’s necessarily fair, nevertheless, it is the real world.