Why no tax revolution? 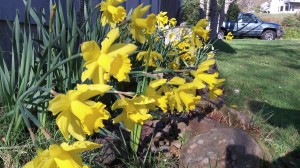 March: A season for daffodils and laboring over tax returns.

This time of year it’s always a little surprising that we haven’t had a revolution lately. It is, after all, the season when people are obliged to spend time with the federal and state income tax codes and the numerous forms and work sheets they entail.
This is when we encounter dizzy-making sentences like this: “If you are filing Form 8815, Exclusion of Interest from Series EE and I U.S. Savings Bonds Issued After 1989, do not include the amount from line 8a of Form 1040 on line 3 of this worksheet.”

The tax codes get ever more complicated, and so does trying to figure out how much you owe or how much you might get back. For decades we have heard of proposals to simplify things. These plans get nowhere because by definition, the income tax has to be complicated. So you’d think that Congress would have worked harder to find another way to raise revenue, one that does not require mountains of regulations and forms or the filing by millions of people of annual returns.

How about a federal sales tax, for example? People would be paying as they go without filing forms. The rate would have to be pretty stiff to raise the trillions of dollars the federal and state governments need to do their modern jobs. But at least this would give citizens a daily reminder of the steep price that government demands.

To get there, maybe we should start with a requirement that members of tax-writing legislatures must prepare their own returns and are not allowed to hire it done. Then they would feel the pain they have inflicted on others, over time, and might be more eager to make a change. (hh)


3 responses to “Why no tax revolution?”