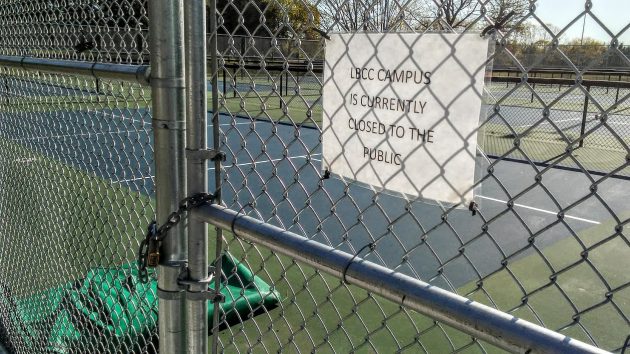 At the new courts on April 20: No one knows when the public will be allowed in.

We’ve had fine summer weather in April, but Albany’s new complex of pickleball courts at Linn-Benton Community College remains closed for two reasons. One, the courts are still not quite finished. And two — what else? — Covid.

A few days ago a reader wondered why the courts were not in use, and she had not been able to get much of an answer.

This week I inquired with Jennifer Boehmer in the college administration. She checked with whoever runs campus operations and passed along the response she got:

“The surface contractor is waiting on a good stretch of dry weather to finish painting the courts, the last two light fixtures are in and ready to be installed, and I talked to the general contractor about the final cleanup, which will be done after all work is complete. I don’t have an exact date, but it should be completed by the end of June.”

Will pickleballers be able to use the courts then? Not necessarily.

Boehmer says it depends in part on Oregon Health Authority restrictions in effect at the time, and in part of what the college considers prudent. “We would love to be able to open for the community if it is possible,” she told me.

As college officials explained to me last fall, their Covid-related policies are aimed strictly at being able to reopen and fulfill their instructional mission, so public recreation takes a back seat.

The city of Albany is paying North Santiam Paving about $330,000 in park development funds to build 12 pickleball courts on what used to be four LBCC tennis courts. Under a contract between the city and LBCC, the courts are to be open for public use when they’re not needed for college programs.

If the college keeps the courts closed much beyond the time construction is complete, pickleball enthusiasts won’t be the only Albany taxpayers who wish the city had built this facility somewhere else. (hh)