Why do turkeys cross the street?

For weeks now, residents in West Albany have been reporting on their frequent sightings of a flock of wild turkeys. This encounter Thursday suggests that motorists will want to keep an eye out for them as well.

I ran into these guys on Calappooia Street near Henderson Park between 6 and 7 Thursday night. Well, “ran into” them is wrong. I did not run into them because even though the lighting wasn’t the best and their dark plumage works like camouflage at night, I saw them in time and stopped.

No idea how long this flock is planning to hang around. Are they planning to take up residence and stay through the winter? Does the flock seem to be getting bigger? Turkeys coming in from out of town?

The Albany presence of these birds has been reported in Facebook and other social media for several weeks. So maybe wild turkeys wandering around the streets — and crossing them at leisure, in mid-block, no less — is what we should expect from now on. (hh) 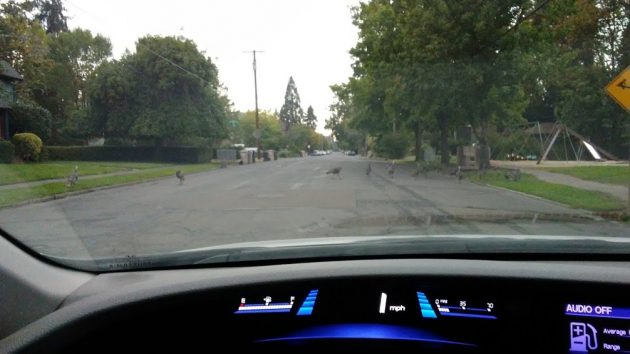 The turkeys on Calapooia Street Thursday evening were not in a hurry.


10 responses to “Why do turkeys cross the street?”