Why camera tickets soared in ’17 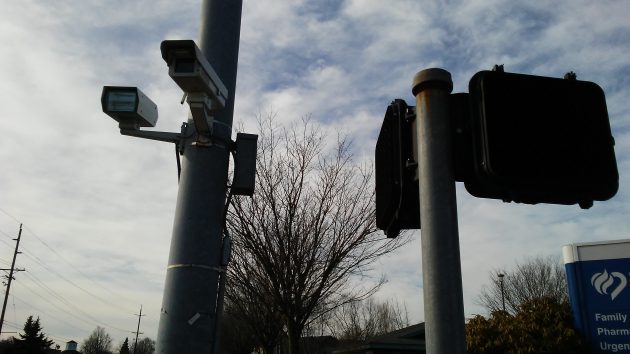 The camera gear aimed at Queen Avenue, photographed in February 2017.

Something else has come up concerning Albany’s lone array of red-light traffic cameras, but  before we get into that, let’s remember the obvious: We don’t have to worry about getting a camera ticket if we stop when the light turns yellow or red.

The new thing I learned about the cameras at Queen Avenue and Geary Street is this: Early last year, Redflex, the company running the cameras, increased the sensitivity of the pavement loops that detect vehicles as they pass. This caused the number of camera activations to more than triple, from about 1,400 in 2016 to more than 6,000 last year.

It also resulted in 1,045 traffic tickets for failing to obey a signal there in 2017, just about twice the 519 that were issued the year before.

I spoke with Pat Hurley, the crime analyst and data expert in the Albany Police Department who handles the Redflex program. He didn’t know why the company raised the sensitivity of the equipment. He thought it might have had something to do with a bill then pending in the legislature to allow cities to use their red-light cameras for speed enforcement as well. (Albany does not do this.)

In any case, Hurley says the police noticed a spike in Redflex reports starting in May. Each reading of a potential violation has to be individually checked to see if a citation is warranted. And the onslaught of observations caught by the cameras at times overwhelmed the department’s capacity to process and evaluate all those pictures and videos.

It’s apparent that the cameras didn’t catch all violations before the sensors were boosted. But it’s also clear that now they are often tripped when there’s no violation clear enough to warrant a ticket. Hurley told me the department is working with Redflex to fine-tune the system’s algorithms so that it does not come up with as many unnecessary observations as in 2017.

A report compiled for the legislature and covering the year 2016 sheds light on why tickets are not issued even though the cameras have gone off. For instance, in 201 of the 1,408 observations that year, drivers had stopped after all, albeit past the stop line or even in the crosswalk, to make a “safe turn on red.” It’s a technical violation, but no cop would issue a ticket for it.

In 84 cases, there was an apparent “gender mismatch,” meaning the driver looked like a female while the registered owner was male, or vice versa.

In 91 cases, there was a problem with DMV records that were either incomplete or wrong. In yet other instances, the photos were not usable because the vehicle could not be identified or the driver’s face could not be made out, or for various other reasons.

And in more than 200 cases, the violations were “too old.” Under the law, the police have 10 business days to issue a ticket. And with hundreds of camera activations coming in to be reviewed, you can see where an officer assigned that task might fall behind.

What about the city revenue angle, you ask? Here you go: In all of 2017, the Albany Municipal Court imposed $206,853 in fines and costs for camera-prompted citations. Of that amount, about $132,000 was actually collected during the year. (The city must share that ticket revenue with the county and state.)

My interest in the details of the two sets of cameras — they watch traffic going south on Geary, which accounts for the vast majority of the violations, and west on Queen — was prompted by a brief discussion at a recent city council work session. The details are interesting, at least to me, but the main take-away is still: Pay attention, slow down and don’t run any lights. (hh)


8 responses to “Why camera tickets soared in ’17”