Why are turkeys here? For safety, man! 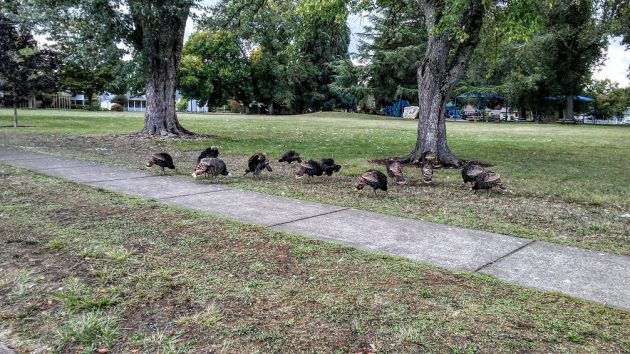 This West Albany flock does some leisurely grazing in Takena Park on the evening of Sept. 18.

It’s not clear why wild turkeys have gathered this summer in a sector of West Albany, but we can guess. Maybe they have figured out where it’s safe for them to settle in for the winter and spring.

An online publication of the Wildlife Division of the Oregon Department of Fish and Wildlife makes clear that wild turkeys, not native to Oregon, were brought to the state so that hunters could shoot them.

But of course in Albany and every other town where turkeys have been reported showing up in recent years, shooting anything is not allowed. So as long as these wily birds stay within the city limits, they are perfectly safe. For turkeys, towns are sanctuary cities.

Even crossing the streets in town, the birds have nothing to fear as long as they move slowly, as they were doing every time I’ve seen them. Drivers see them and slow down, even stop until the last one of the little band has reached the other side.

ODFW says turkeys were first successfully introduced in 1961. That was done with the Merriam’s subspecies of the wild turkey, Meleagris gallopavo. Then, in 1975, the state brought in a second subspecies, the Rio Grande variety. Now, according to the agency, more than 10,000 wild turkeys have been transplanted to sites all over the state.

There is no mystery about why they would go to all that trouble. They wanted to provide more game animals so people would buy hunting licenses and go after them. The first season was in 1987. ODFW says that “Oregon’s six-week spring turkey season is among the most liberal in the United States.”

Various commenters on previous turkey stories on this site have suggested that these birds can leave a big mess if they like your yard and stay a while. If that happens to you, you can thank the state wildlife managers who brought the birds’ ancestors to Oregon starting 58 years ago. (hh) 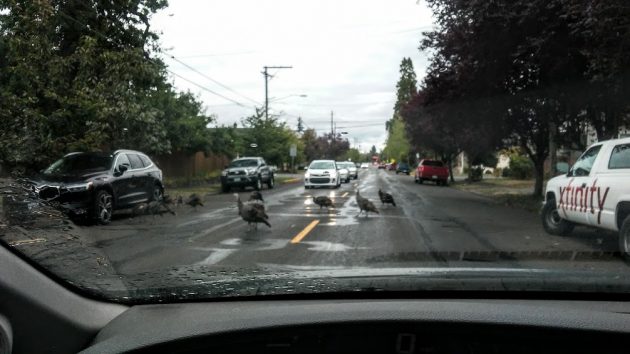 And sometimes, like here on the 17th on Ninth Avenue, they stop traffic.


9 responses to “Why are turkeys here? For safety, man!”