Why a photo of this old bike? Because… – Hasso Hering

Why a photo of this old bike? Because… 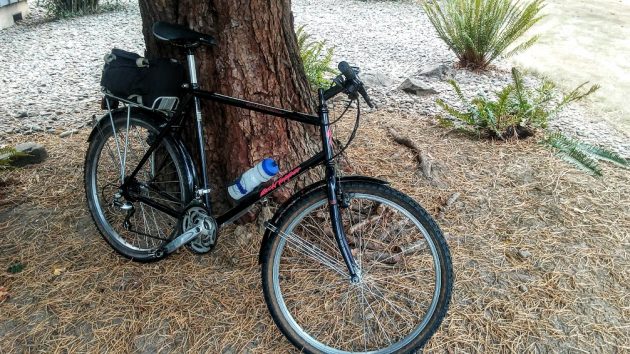 This bike has been around a long time and seen different parts of Oregon and California.

Being stuck inside because of wildfire smoke that once again reached the “hazardous” category on Wednesday, I was looking at this old bike hanging in the garage. Then I hauled it out and leaned it against a sequoia for a portrait.

Why? Because 2020, while a rotten year in many ways, also marks a notable anniversary for this Specialized Rock Hopper. It was 30 years ago, in the spring of 1990 that I bought it at Bike ‘n’ Hike in Albany. I needed a sturdy new bike, not too expensive, so that I could join our boys on a loop tour around Mount Hood organized by the Mid-Valley Wheelmen. (That was the name back then. It’s different now.)

Like the bike, Bike ‘n’ Hike is still around, I’m happy to say, keeping this old model going with reliable service every once in a while. If you like cycling, be glad shops like this exist. Support them as a customer. You can buy lesser bikes at big box stores, but forget about getting them fixed there.

I ride other bikes now, but I’m fond of this one. It’s not fancy, but comfortable, forgiving and relatively light.

The frame is made of chromoly. That’s a chrome-alloy steel that’s harder than regular steel and lighter too. Unfortunately it rusts, and this frame shows it.

The bike once rode in the back of my truck, at freeway speed, through a snow and rainstorm in northern California. I can still see the effects of that on the handlebar.

After that loop tour 30 years ago into the Columbia River Gorge and along the back side of Mt. Hood, this bike has been other places too. It’s been ridden in Central Oregon in winter, and it often rolled along the roads near Medford in Southern Oregon in all kinds of weather including blazing summer heat.

It’s gone up and down a segment of the central Oregon coast, and it’s been on the Santa Ana River Trail in Orange County.

One time in California, the saddle wore out and I got a replacement — better than the old one — in Lancaster.  That’s the seat still on the bike.

After 30 years, this old bike is still pretty good, and I hope to ride it again as soon as the air clears up. (hh)

7 responses to “Why a photo of this old bike? Because…”