Where the sidewalk ends, for now – Hasso Hering

Where the sidewalk ends, for now 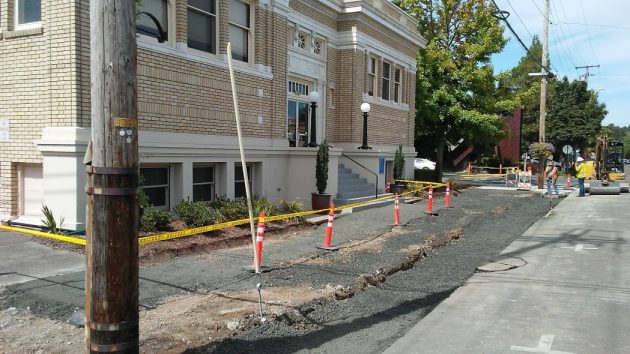 Getting inside the downtown branch of the Albany Public Library took a little doing Wednesday but as usual, it was worth the effort. Going to a library always is its own reward, no matter the hurdles in the way.

The downtown street reconstruction project is affecting not just the library but just about everything in the central part of town. Sidewalks and street corners are being ripped up and rebuilt just one or two blocks at a time, but with all the equipment, whether parked or in use; the hundreds of construction signs and traffic cones, plus the flaggers and detour markers — well you get the idea that the whole place is being turned upside down.

The crews of contractor Emery & Sons, though, are taking pains to preserve public access through all the activity. At the Carnegie Library, even though the sidewalk was gone, they had carefully used yellow tape to designate a route to the front steps.

On-street parking in front of the library has temporarily disappeared, as it has in other downtown blocks. As a consequence, the city lot at Third and Ferry (I still call it the old PayLess lot, which it hasn’t been for something like 35 years) was jammed full on Wednesday.

We won’t know if it works until well after the construction is complete. If it does work, great. If not, at least we’ll have spiffy downtown streets. (hh) 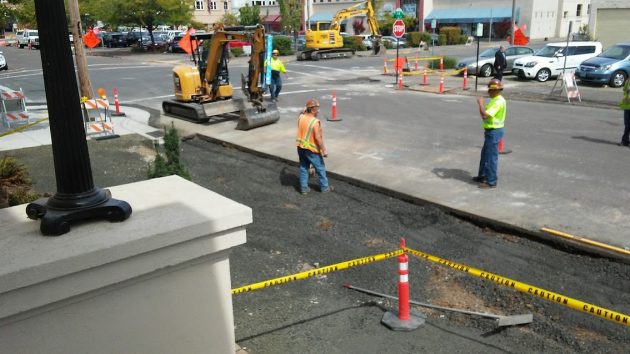 The view from the downtown library’s front door on Wednesday.

2 responses to “Where the sidewalk ends, for now”