Where the new carousel will turn 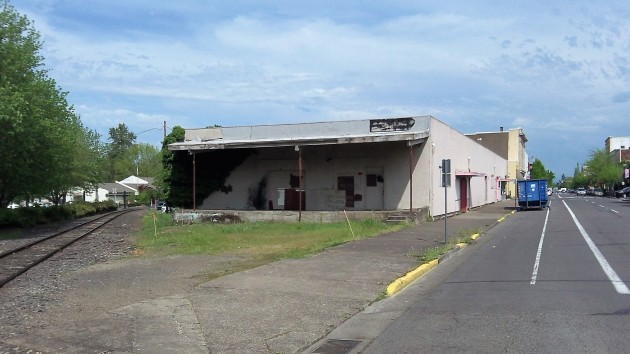 This former turkey processing plant between the P&W tracks and West First Avenue will give way to the new Albany Carousel.

My notes say on this meeting say “yak… yak… yak,” which is shorthand for all you need to know about Wednesday’s discussion about the Albany Carousel’s request for $339,500 in urban renewal money. In the end, all but two members of the Central Albany Revitalization Area advisory board voted, as you knew they would, in favor of granting the request.

As reported here Sunday, the carousel asked for the money to cover what it will have to pay in city development fees, to rebuild the sidewalk and streets outside its planned new building, and to get rid of the lead paint and the asbestos-laden floor tiles when its temporary building at First Avenue and Washington Street is demolished.

The board’s back and forth centered on whether the carousel organization would continue to raise private funds (it will), and whether it can repay some of the CARA aid if it raises more money than it needs for its planned new building, estimated to cost $5.6 million.

CARA has already given the carousel $300,000 to buy the property at First and Washington and $110,000 to design the new structure, intended to be an attraction or “anchor” on the west end of First Avenue. The additional money will be paid in the form of reimbursements for costs incurred for the three purposes identified in the request. If those things cost more, it’s the carousel’s problem. If they cost less, the city will pay only the amounts they cost.

For the carousel, Dave Johnson and Gary Goby, MD, appeared before the CARA board. If I understood them right, the old turkey factory at First and Washington will start coming down about June 1. The carousel animals and other gear have been, or are being, moved to nearby Two Rivers Market. With luck, the new building will open in 2017.

As a nonprofit organization with editorial and cultural aspirations, the carousel will be trying to raise money as long as it lasts. But it will also be a main attraction, bringing crowds to downtown Albany.

The CARA board made it clear this would be the last urban renewal contribution to the carousel. As for the two no votes on the request, they came from Mitch Langjahr and city Councilman Rich Kellum. (hh)


10 responses to “Where the new carousel will turn”