Where teen burglars were stopped 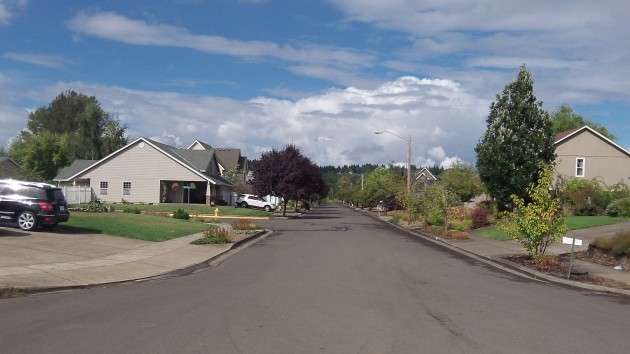 This is the tranquil street in North Albany, the 1700 block of Whitecliff Drive N.W., where things started unraveling this week for what appears to be a gang of teenage burglars. Make that alleged burglars.

It was from this street, according to Albany Police, that a homeowner called the police about 1 a.m. Sunday to report that he had just chased off someone who was trying to break into his shop. In response, the police say drily, “officers located and detained” three boys, a 16-year-old from North Albany and two from Corvallis, 16 and 17 years old.

All three were charged with attempted burglary, and two were taken to the Linn-Benton Juvenile Detention Center in Albany after “Investigation revealed they had been involved in multiple burglaries and thefts in North Allbany over the past several months.”

Police investigators were not through with the case, though. On Monday and Tuesday, they identified three additional suspects. all boys and all three from Corvallis, two 16-year-olds and the other 15. They were charged and sent home with their parents.

Albany investigators have counted 10 burglaries and several apparent attempts attributed to some or all of them. Officers think there may have been additional cases that went unreported, and they suggest that anyone with relevant information contact the department at 541-917-7680.

This is serious stuff. Burglary is a felony. The cases have been referred for prosecution to the Benton County District Attorney’s Office. It will be instructive to see what happens to these boys, and to the extent possible, I hope to keep track. The police provided their names, which some departments don’t do with juveniles, so it should be possibe to learn how their cases come out.

In the meantime, the police reiterated for the umpteenth time the old advice about preventing most burglaries: Upgrade your locks, then lock your doors and windows and don’t leave them open at night. And light the outside of your place, preferrably with motion-sensor lights.

Maybe this time the advice will do some good. (hh)


2 responses to “Where teen burglars were stopped”