When you’re stuck at a signal … – Hasso Hering

When you’re stuck at a signal … 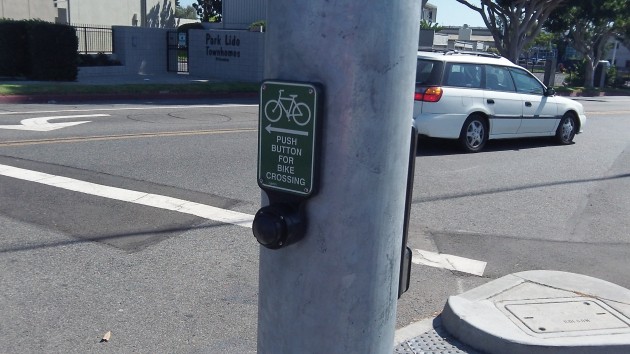 No sweat reaching this button if the light refuses to change.

Next time the Albany Bicycle and Pedestrian Commission is looking for some project, it might want to consider the fact that many modern traffic signals ignore people on bikes. Some communities have solved the problem with gizmos like the one in the photo, a bike-crossing button similar to those routinely provided for people on foot.

At signals activated by cars above a loop in the pavement, the lights typically don’t change unless a vehicle is on hand, waiting. In the absence of vehicles, the smaller loop built into the bike lane often fails to cause the light to change, no matter how energetically or far the cyclist leans his bike. The answer is to wait until a vehicle shows up to trip the sensor, which during certain times on some city streets can be a long time, or to run the light.

Why not just walk over and hit the button provided for pedestrians? Because typically the button is mounted some distance away from the bike lane, and by the time you get back to the road from pushing the button and mount up, chances are the light has turned red again. So you look right and left and behind, make sure no cop is in sight, and run the light as soon as traffic on the cross street offers a big enough gap.

The bike-crossing button above is on Superior Avenue in Newport Beach, Calif. Like others in that town, which has a lively bike culture, it is mounted right next to the bicycle lane, within easy reach. I would not expect anybody to retrofit Albany signals with devices like this, because of the cost. But how about the next time a new signal is installed? (hh)

5 responses to “When you’re stuck at a signal …”