When you wish for another lane, or bridge 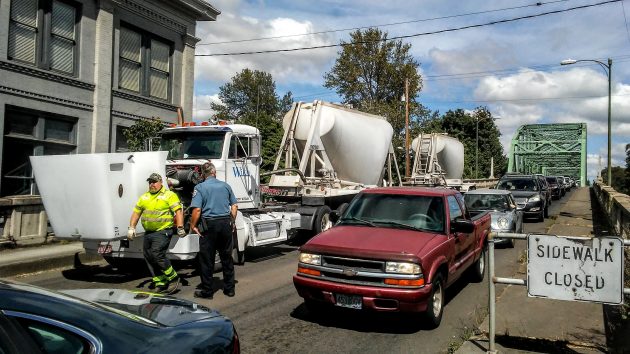 Traffic inches past this stalled truck on the Ellsworth Street Bridge just before noon today.

Most of the time, the 95-year-old Ellsworth Street Bridge on the Willamette River works just fine, but sometimes you wish it had another lane, or Albany had another bridge.

Today was one of those days. A truck bearing the Wilco Farm Store logo and its trailer were stalled in the right-hand lane on the downhill side of the bridge. And for some reason, there was pretty heavy traffic from Benton County to the Linn County side.

The result was the kind of traffic jam that used to happen on many weekday afternoons before the corona crisis cut down on commuting back and forth to work. Traffic was backed up on Highway 20 as well as North Albany Road and Spring Hill Drive.

This kind of situation could be a big problem. Imagine somebody in North Albany was having a medical episode and was being driven to Albany General Hospital, where the emergency room staff is prepared to save lives. Normally the trip takes five or 10 minutes, but not if you’re spending half an hour in stop-and-go traffic.

The New Albany Bridge — that was its name until the Lyon Street Bridge was completed in 1973 — was opened to traffic in November 1925 and dedicated the following spring. It replaced  the old Albany bridge, a spindly construction a few hundred feet upstream that was torn down in June 1927.

The old bridge was too dilapidated to save. That’s why the Highway Commission and Conde McCullough, Oregon’s famous bridge engineer, built the new one. But sometimes, like when you’re stuck on North Albany Road with hundreds of vehicles ahead of you on 20, you wish that old bridge was still there and in good enough shape to take you into town. (hh) 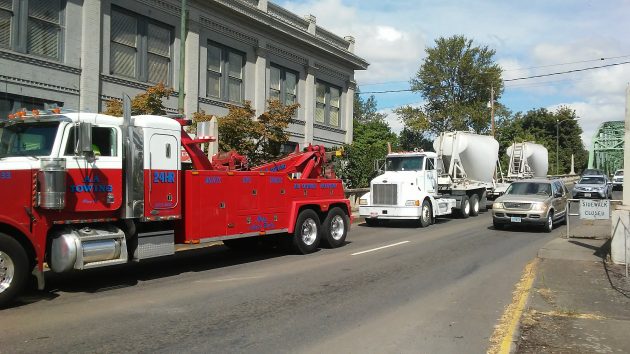 A truck-recovery rig from AA Towing gets ready to remove the stalled vehicle.


12 responses to “When you wish for another lane, or bridge”