When you see this, stop and buy a cup 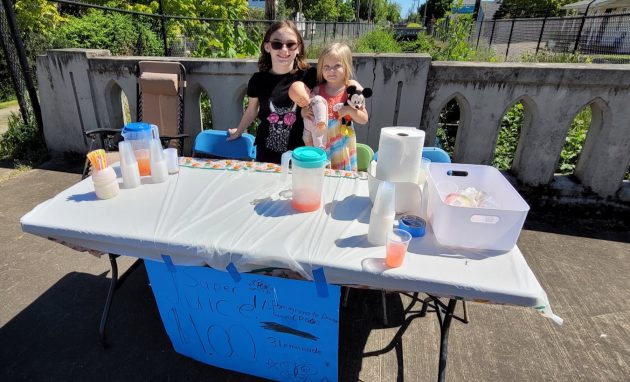 Hope, 11, and her 2-year-old sister, Naomi, took time out from their lemonase business to pose for a photo Saturday.

In a spring marked by dismal news on the economic front, things may be looking up. On Saturday afternoon I came across a kids’ lemonade stand. It was the first one I had seen this year, and I took it as a sign of hope.

This was was in Albany, on the Fourth Avenue bridge across the Santiam Canal, right next to Vine Street.

There, as you can see in the photo above, 11-year-old Hope and her little sister Naomi were waiting for customers for their “3 lemonade” and pomegranate and guava “super juice.” (That’s if I correctly interpreted the sign they had made.)

Their dad, Jake Thompson, told me the girls’ brother, 5-year-old Jax, had been part of the enterprise too. But things were slow and he got bored and went into the house.

Dad said Hope would like to get an iPad, and her parents encouraged the idea of maybe trying to earn some money toward that goal.

That part of Fourth Avenue does not get vast amounts foot traffic, I imagine. But the Thompson house is next door, so what are you going to do?

It takes work to set up an enterprise like this, even if your mom and dad help, but it also takes a brave kid to stand out there, face strangers, and hope to make a sale. So, when you see kids who went to the trouble to set up a lemonade stand in front of their house, stop and buy something.

That half-empty cup you see on their table is mine. With the photo taken, I finished my drink. And excellent lemonade is what it was. (hh)