When you can’t see clearly or far 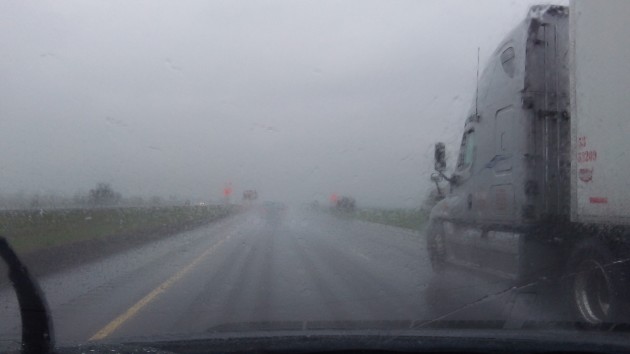 Visibility is not the best when it rains even a little on I-5.

It wasn’t foggy in the valley Wednesday except on I-5. And there the gray blanket in the air wasn’t fog but the usual spray kicked up by traffic. Which made me wishing for the umpteenth time for better drainage on the freeway.

The forecast calls for heavy rain in the Willamette Valley starting tonight and continuing through the weekend. So there’s a good chance that drivers on the freeway will once again be driving nearly blind, especially as traffic picks up ahead of Christmas.

I used to blame the big semis whose trailer wheels are unprotected by any kind of mudguards or fenders. But actually, pickups and passenger cars also kick up plenty of spray as they race along at freeway speeds, their drivers seemingly unmindful of the possibility of hydroplaning out of control.

Didn’t I read some years ago about the growing use of semi-porous asphalt surfaces on highways so that standing water would be absorbed more quickly? If that’s been done on any of the Oregon freeway resurfacing projects lately, it may have improved the situation but has not solved the problem. And of course some stretches of I-5 have been resurfaced with what looks like concrete, where the water has no place to go except to slowly drain to the side.

So what’s the solution if you have to get on the interstate when it rains? Maybe it’s to tuck in behind some semi with a well-lighted trailer you can easily see in the gloom, turn your wipers on high and patiently follow in the fat tie tracks cleared of water by the truck until conditions improve. If that’s too slow for you, go ahead and pass and hope for the best. (hh)


4 responses to “When you can’t see clearly or far”