When you can ride Albany Carousel – Hasso Hering

When you can ride Albany Carousel

For a dozen years or more the Albany Carousel and Museum has been working toward the day when people can actually ride its restored antique merry-go-round. Click on the video to learn from Wendy Kirbey, the driving force behind the project and its board chair, when she thinks that day will come.

The carousel project has been in the works since about 2002. In recent years volunteers have been beavering away in the nonprofit’s building at Washington Street and First Avenue, carving the 52 wooden creatures that will be installed on the carousel’s historic mechanism once a new building is constructed in the same spot. 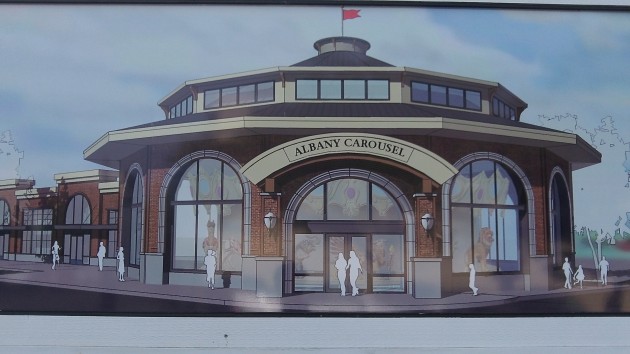 On the outside wall: A rendition of what the finished building should look like.

That new building — the main part of it will be round to accommodate the mechanism — will jut out into First Avenue across from the Albany Post Office’s yard. To accomplish that, the city council will first have to vacate a portion of the First Avenue’s right of way. On Wednesday, the council voted to have the city initiate the vacation process, saving the carousel organization time and money,

The carousel organization submitted a site plan for its construction in December. The plan shows the building to be 14,218 square feet, and part of it will take up a little more than 1,000 square feet of the street right of way. This was the plan all along so that the carousel can be seen all the way down First Avenue. City officials and many others hope the carousel will play a big role in revitalizing downtown.

The street vacation will take up most of the right lane of First Avenue. The drawing submitted to the council shows that three or four parallel-parking spaces will be lost, but about a dozen diagonal spaces will be created on the carousel side of the street. A decision on the street vacation and the site plan itself, however, is still some time off.

Friday I ran into Wendy and her husband at Taqueria Alonzo and asked about an update on the project. The carousel needs about $6 million to start construction. Kirbey remains adamant against taking on any debt for the project, and she believes the money will have been raised by January 2016. That would clear the way for demolition and, in due course, about 18 months of construction. So, the target date for taking your first ride on that carousel: July 2017 (hh) 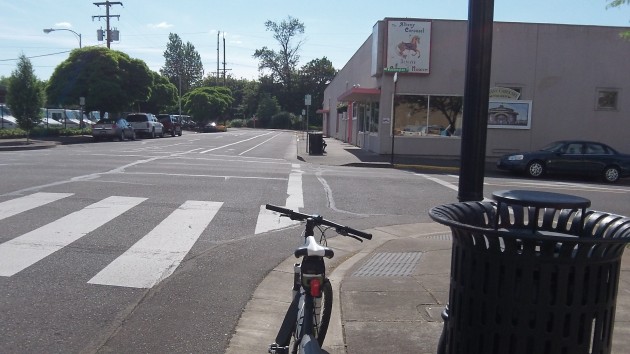 That right-hand lane in front of the present carousel building will be taken up by the planned structure and diagonal parking.

13 responses to “When you can ride Albany Carousel”