When the bin’s full, stop working 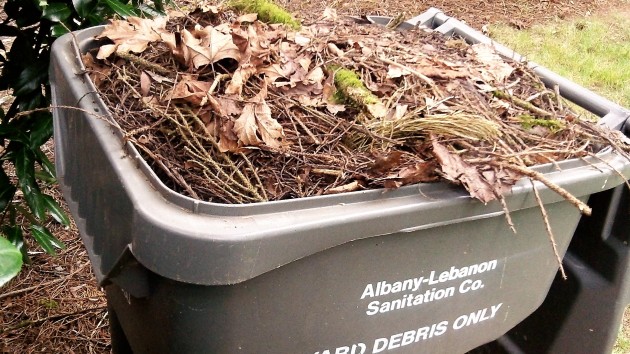 Picture this: The yard waste container is filled to the brim, but the pick-up day for yard debris is more than a week away. The first thing to do is to take a break from the kind of yard work that generates more debris. The next thing is to wonder whether weekly service, rather than every other week, would be a good deal.

In March 2015, Republic Services, the Albany disposal franchise holder, asked the council whether it was interested in having the company make weekly instead of biweekly yard debris collections. This would allow customers to add their food waste to their yard debris to be turned into compost. But the change would have a price. It would raise the bill of trash service by $3 a month for all customers, not just those who wanted yard waste picked up every week.

The council turned down the change last year. But on Wednesday Bill Root, a North Albany resident who had spoken up in favor of weekly yard waste service then, brought it up to the council again. Councilors reacted the same way they did in 2015. Why should people have to pay extra for something they may not want and don’t need? That seemed to be the prevailing attitude on the council, and it’s hard to disagree.

If people’s yards generate more debris than one container every two weeks can handle, especially in the spring and fall, they can pay extra and get Republic Services to provide them with a second bin. And if they don’t want their food waste to end up in the landfill, where it doesn’t do any harm, they can either produce less or start composting it on their own. (hh)


10 responses to “When the bin’s full, stop working”