What’s with the Halloween gore? 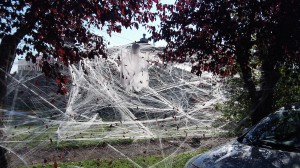 Halloween is coming up, in case you didn’t notice. The chance that you didn’t notice is admittedly very slim. The stores and their ads have been full of Halloween stuff for weeks. And so have some of our neighborhoods, some houses with modest displays on their front porch or in the picture window, others with elaborate constructions meant to evoke the spookiness of the occasion.

Because of merchandising, what used to be a one-night occasion for fun and a few pranks by kids has become a prolonged obsession of the wider public. All of this may be fine, of course, and even if it wasn’t, what’s anybody going to do about it? Nothing, that’s what.

But what is it with some people going overboard with the simulated gore? You’ve probably seen these decorations that make it look like somebody is being dismembered. There’s blood all over the place. In one TV ad for M and M’s, a guy opens the door to trick-or-treaters with a mock ax going into his back and coming out his chest. This is supposed to be amusing. And maybe it is to some people.

But after the last century of death, torture and destruction, and after two more recent wars with plenty of dead  bodies and young people crippled for life, you’d think we’d all find Halloween amusement in other kinds of themes. Ghosts and haunted houses, fine. But leave the mayhem behind. (hh)