What’s up with Senate gun bills? 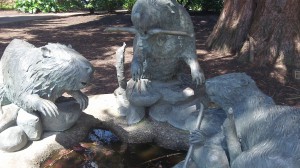 Beavering away outside the state Capitol …

It was on April 18 that the state Senate Judiciary Committee passed four heavily watered-down bills directed at gun owners. So far, as of May 1, none of them has seen — or been scheduled for — action on the Senate floor. What’s going on here?

It could be that the bills don’t have enough support to get through the Senate. They had a hard time getting through the committee, after all. Only after they were stripped of various onerous provisions did they get the support of Arnie Roblan from Coos Bay, one of the three Democrats on the Senate panel who eventually voted to advance the bills. And if only one of the Senate’s Democrats does not support these measures, they cannot pass as long the 14 Republicans remain solidly opposed. So it’s possible that the Senate president, Peter Courtney of Salem, is delaying Senate action until he can unite all 16 Democrats behind the bills. That’s one possibility.

Another is that since the measures now are almost without meaning and effect, legislative leaders figure there’s no point in passing them at all. But nothing is final until the lawmakers go home at the end of June, and these bills could still be changed to cause all kinds of unnecessary grief. So there’s reason to keep an eye on them, and that’s the plan here. (hh)