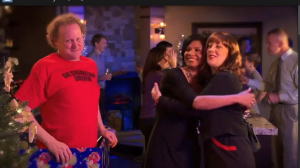 This is the OLCC’s image of a designated driver at a Christmas party.

The Oregon Liquor Control Commission sent out a press release and  this was the headline: “OLCC celebrates ‘Drinking & Drugged Driving Awareness Month’ with Annual Holiday Campaign.” The message was worth putting out. For example. people giving parties where alcohol is served can be held responsible if a guest gets drunk and then drives and harms someone. But what about the choice of verb?
“Celebrates”? What’s there to celebrate about a month to raise awareness of drinking and driving, or taking illegal drugs and driving, or doing both alcohol and drugs and then getting behind the wheel.

Awareness — that’s seems to be the main cause these days. If you ask some guy why he’s riding a unicycle from Alaska to Tierra del Fuego, you can bet he’ll say: To raise awareness of some dread disease. It’s as though most of us are not already painfully aware of most of the really bad things that ruin lives, from cancer and heart disease to child abuse and, yes, drunken driving. Why do we need a special month or a week –or a stunt — to raise awareness?

If people are so removed from reality as to be unaware of harmful things and actions, including drugged and drunken driving, how is a “celebration” of a special month going to make them aware enough to quit committing those particular crimes? (hh)


One response to “What’s to ‘celebrate’ here?”