What’s to become of this vacant lot?

Looking east across the city-owned lot from the northern end of Madison Street. The Calapooia brewery is in the background at right.

The Albany City Council is getting ready to sell a one-acre lot off the Water Avenue railroad track, a parcel the city managed to get for nothing in 2013.

On Wednesday, the council declared the property at 205 Madison St. N.E. to be surplus, meaning the city has no use for it. It’s the first step toward putting the vacant land up for sale.

No one at City Hall apparently remembered why the city pressured the BNSF railroad to hand over this property. The railroad gave up the lot as part of the setttlement of a city lawsuit, filed in 2008, over a franchise covering that part of its track that runs for a few blocks in the middle of Water Avenue.

The railroad land was supposed to be available for development of the surrounding acreage, which eventually became the 58-dwelling Edgewater Village. But once the city got the parcel, the council never followed through with making it part of that project.

For years, the unimproved lot was accessible via the grade crossing at Hill Street, and people would park there when visiting the restaurant across the street, then Hill Street Brews and now the Calapooia Brewing Company.

The parking area was lost when curbs were installed as part of the Edgewater development.

When the council voted Wednesday to declare the land surplus, members made no mention of how they want the lot developed once it is sold.

The city staff suggested a procedure for the sale. Following an appraisal, the lot would be advertised. Interested parties would present their offers and their ideas for the “highest and best use” of the the property at a public hearing. The council would then retreat behind closed doors for an executive session to discuss what to do.

Why the staff would suggest an executive session to discuss public offers for real estate is hard to say. Except for this: Holding executive sessions not only when it’s necessary to protect the public interest but whenever it’s allowed by law — that’s now the Albany way. (hh) 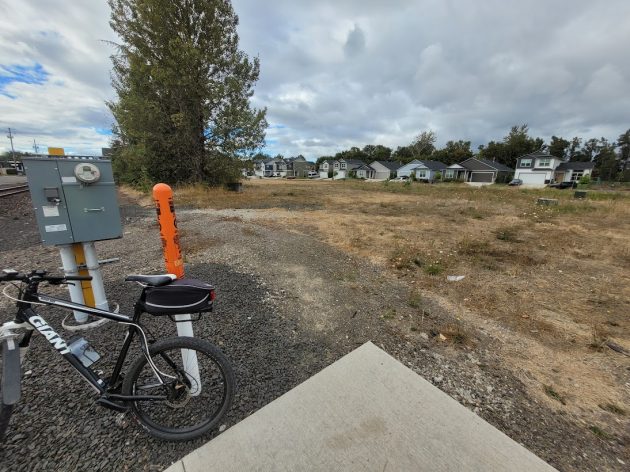 Parking used to be available from this side — until this end of Hill Street was improved with curbs.


7 responses to “What’s to become of this vacant lot?”