What’s this? A big party downtown! 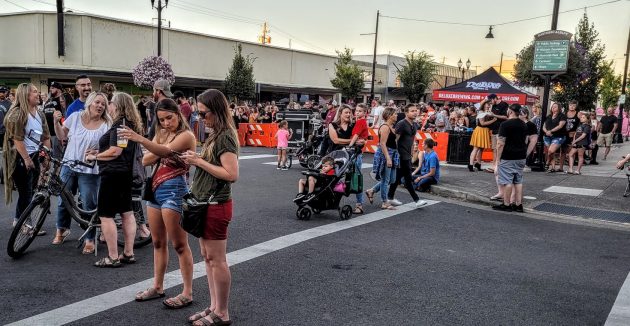 Some of the people at the “block party” in downtown Albany on Satyurday evening.

At first, all I heard on a bike ride through Albany on Saturday night was the sound. Sounded like a band.

Then I  remembered I had seen something online about a “block party” that was planned for downtown.

Turns out that’s what it was when I got closer. And from the looks of it and the amplified sound, it appeared to be a smashing success.

Food booths, bounce houses for kids, other entertainment, beer for grownups, and as I mentioned, bands — all of this had drawn a big crowd to the corner of Third and Broadalbin. Traffic on the nearby streets was blocked.

The party was organized by The Garage, a tap room on Third Avenue. The announcement on Facebook listed dozens of Albany area businesses as sponsors.

I don’t know how many people actually showed up during the afternoon and evening. But if someone told me the number was a thousand or more, I would not be surprised. Some 2,800 people had responded to one of the Facebook posts about the event.

I was on a bike ride, as I said, so I didn’t stay. But I was impressed that something like this could be organized downtown and turn out to be a success.

They billed this as the “first annual.” So maybe it will become a thing that families and especially young people look forward to in Albany when they decide to stay home for the Labor Day weekend instead of going out of town. (hh) 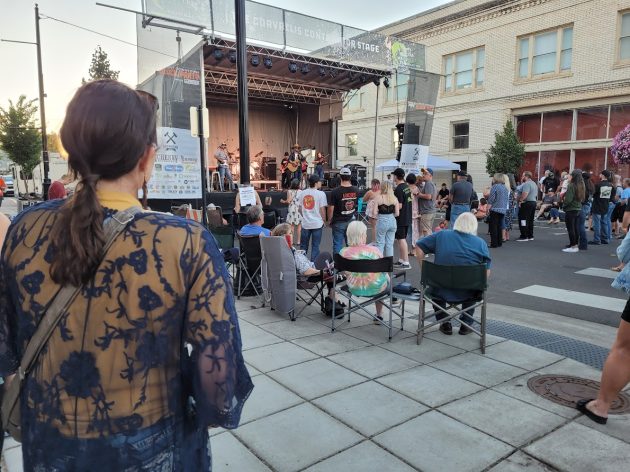 The stage was set up on Third Avenue.


2 responses to “What’s this? A big party downtown!”