What’s that construction on Old Salem? 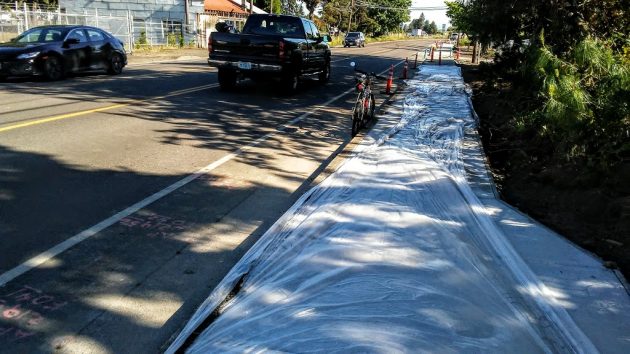 A sheet of plastic protects the new concrete sidewalk on Old Salem Road in Millersburg on May 27.

If they want to walk from Millersburg to Albany, or the other way, one of these days people will have a paved sidewalk to make the trip. A segment of nearly seven-tenths of a mile is under construction now.

Millersburg resident Peggy Richner noticed the work and asked me what was going on. For the answer I turned to Linn County Roadmaster Darrin Lane.

“The project on Old Salem Road … is a sidewalk infill and ADA upgrade project funded through the Albany Area Metropolitan Planning Organization (AAMPO),” Lane wrote in an email. “The work area extends from just south of Knox Butte Avenue to the existing sidewalk at ATI.

“The purpose is to eventually complete an ADA compliant pedestrian way from Millersburg’s south city limits to the existing sidewalk north of the Willamette Memorial Cemetery. We do not currently have funding identified for the remaining sections but will be working with Millersburg and ODOT to get the entire project completed. ODOT has jurisdiction of a portion of Old Salem Road near the interchange.”

In early March, Linn County awarded the sidewalk contract to Brown Contracting Inc. of Eugene for about $470,000, the lowest of four bids. The job is supposed to be complete by Aug. 14, 2020.

There might not be much foot traffic along that section of Old Salem now, but maybe that will change in the hundred years or so that this concrete sidewalk will last. (hh)


5 responses to “What’s that construction on Old Salem?”