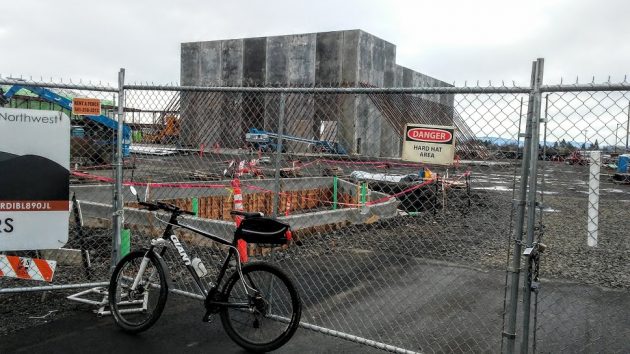 Looking at the West High construction site from the fence off Liberty Street on Saturday afternoon.

If you’re wondering, as I was on a bike ride Saturday, what that huge concrete box at West Albany High School will contain or house, the answer is the school district’s new auditorium.

The theater is pretty much the centerpiece of the $61.5 million expansion taking place at West. The other parts include space for career and technical education, an auxiliary gym, a commons area for students, and of course new tennis courts to replace the ones demolished to make room for the new buildings.

As you’ll remember, it’s all part of the $187 million Albany school construction and renovation program funded by a $152 million in bonds plus other sources.

And as you can see, the shell of the theater consists of concrete panels that were tilted up into place. From outside the construction site, the structure looks to be about five stories tall.

On Saturday night, I couldn’t find just how many people the theater has been designed to seat. It’s intended to be used not just by West but by other schools and the entire community as well. So when it’s finished some time this fall and they have a public event to mark the completion, we’ll find out how big a crowd it can hold. (hh)

P.S. I heard from a staff member at West who was told the theater will have 716 seats, 10 of them designed for ADA compliance. Another school district source said the capacity is 714.

And from the other side …

2 responses to “What’s that big concrete shell at West?”