What’re those? Answer: Look it up! 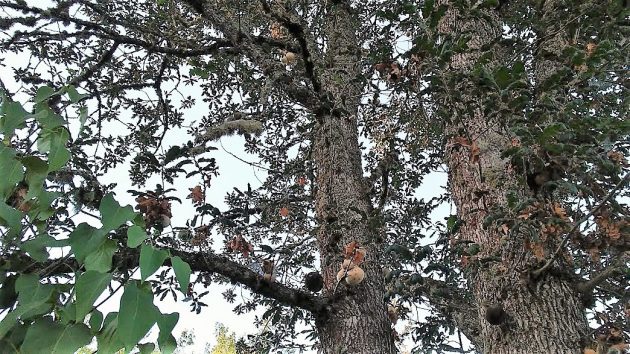 Those round things on oak trees in West Albany are mysterious only if you don’t know what they are.

I couldn’t remember what the tennis-ball-sized structures in these oaks were called, or indeed what they were. So I looked them up.

They are, of course, oak galls. And they are caused by Cynipid wasps. There are more than 200 species of this family of wasps in the American West. This I learned from an online fact sheet on oak galls put out by the Oregon Department of Forestry.

What happens, the publication tells readers, is that these tiny wasps — 6 millimeters long or less — lay their eggs on Oak trees, usually in leaves and branches. The resulting larvae produce a substance that causes the plant tissue to swell to the point where it forms a ball, or gall. The larvae live in those galls until they pupate and emerge as adults,

What does this do to the oaks? It may gall them no end, but it doesn’t hurt them very much. Sometimes the affected branches die, especially when squirrels have peeled the bark in the hunt for larvae. But the damage is mostly cosmetic, and the Forestry Department does not recommend using pesticides to fight the wasps.

“Oaks typically can reflush their leaves normally even after a season of high gall insect attacks,” the department says in its forest health fact sheet on the subject. (For “regrowing,” foresters apparently use a term the rest of us may think of when we have to flush twice.)

I have found that Mendel the Wonder Dog likes to chew on oak galls he finds on the ground and refuses to give them up. The Forestry Department is silent on what this does to the dog. But I can’t imagine it’s good, so before Mendel visits again, I’ll have to scour the yard for all the galls that have fallen down. (hh)