Whatever happened to the Chipotle plan? 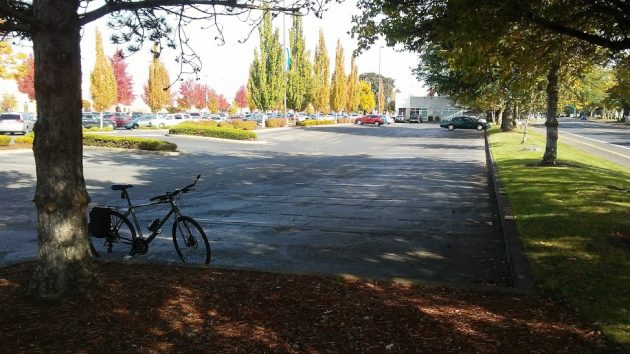 This is the lot off 14th Avenue where the city has approved a site plan for a Chipotle Mexican Grill.

On a bike ride somewhere else last Sunday, I passed the section of the Heritage Mall parking lot where in June the Albany Planning Division was considering a site plan for a Chipotle Mexican Grill. The site off 14th Avenue, just east of the Red Robin, remains untouched, so what’s the status of that plan?

The city, it turns out, approved the site plan in July and issued a revised notice of that approval on Aug. 1. It also approved the partition of the site on which the restaurant is planned from the rest of the Heritage Mall real estate.

The site plan had been prepared by David Reece & Associates, the Albany engineering and planning firm. When I checked with Reece this week, he told me that the restaurant company was planning to go ahead, but that there had been a delay in the separation and sale of the proposed restaurant lot. He expected that to be ironed out in time.

The company that applied for the site plan approval is Confluent Design, of Denver. The land owner was listed as Heritage Realty LLC of Great Neck, N.Y.

The Chipotle plan calls for a restaurant of 2,315 square feet with parking and a drive-through lane.

So, while the timing is unknown, the plans for an Albany outlet of that national franchise chain appear to be still in the works. Meanwhile, anybody looking for Mexican fare has plenty of choices in Albany. My own favorite is Taqueria Alonzo downtown. (hh)

Thanks to the commenter below, who questioned my compass directions in the lead paragraph. The story has been corrected to say that the Chipotle site is east of the Red Robin restaurant.


6 responses to “Whatever happened to the Chipotle plan?”