What? Yes, our cooling climate! 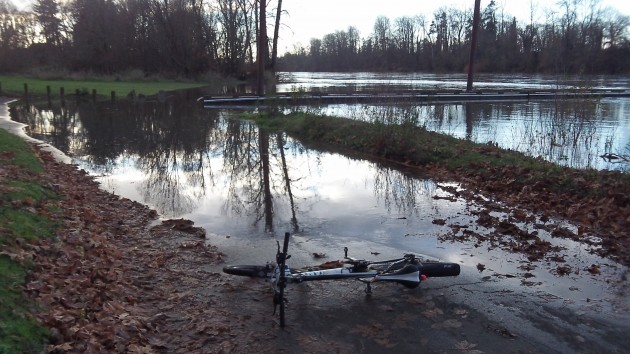 When your bike route is blocked, your thoughts naturally turn to climate issues, right?

The lower road at Albany’s Bowman Park was under water Saturday because the Willamette River rose quickly over the last couple of days. After cresting on Sunday afternoon at a predicted high of 14.5 feet on the Albany gauge, it will drop again just as quickly as colder weather sets in, possibly along with freezing rain late Sunday night. So it’s obviously time to think, once again, of climate and weather and what they’re doing to those of us not smart enough to move to a tropical isle.

This being late November, there’s nothing unusual about either the weather or the river’s rise and fall. But conditions in November and December do make some of us wish that climate change — as in the warming we hear so much about — would make up its mind and arrive a little quicker. It probably won’t, though. Maybe we should worry about cooling instead.

Average annual temperatures in the Willamette Valley, as tracked by the National Oceanic and Atmospheric Administration, hover around 52 degrees Fahrenheit and have been trending slightly downward for the last couple of decades. Average valley temperatures in December are about 39 degrees and show a similar downward trend since 1990. For January, the average valley temp is 40 degrees. And the trend line since 1990 is down ever so slightly, a mere 0.1 degrees F per decade, according to NOAA.

Yes, those numbers are cherry-picked. If you take much longer periods — and on NOAA’s climate site you can — you see trend lines going up. But what’s been happening lately counts more because it affects what we might expect.

You may have heard on the news that 2014 was on track to have the highest average global temperature ever. “Global average” is a meaningless number, though. It says nothing about actual conditions in particular places. So it may have been getting warmer in Zanzibar or Australia, for all I know, but the recorded numbers say that it’s not getting noticeably warmer here. Which is something of which you are reminded now and then, especially when the forecast warns of the second episode this season of freezing rain. (hh) 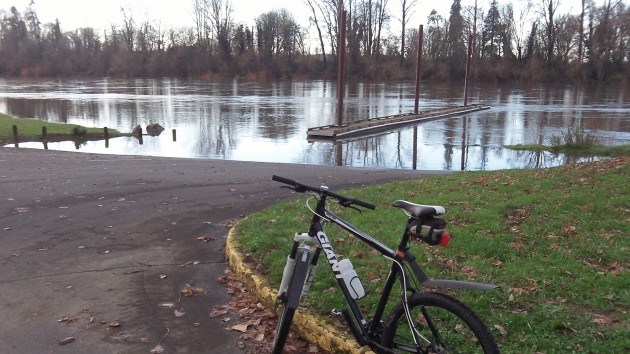 You couldn’t reach the floating dock at Bowman Park with dry feet Saturday.

5 responses to “What? Yes, our cooling climate!”