What we learned from the eclipse 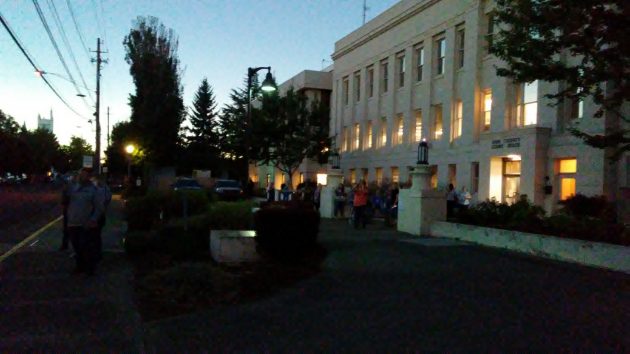 People gathered in the dark outside the south entrance of the Linn County Courthouse during Monday’s total eclipse.

So have we learned anything from the Great American Eclipse on Monday? I don’t mean in a scientific sense but as news consumers and participants in public events?

One thing some of us have learned, or relearned maybe, is to be a bit more skeptical of government advice and warnings. For weeks ahead of the big event, state and local agencies were telling people to stock up on food and fuel because the crush of visitors to Oregon would deplete supplies and traffic jams would make it hard to get around.

It didn’t happen, obviously. Local streets were all but deserted during the eclipse. Afterwards, as tourists were trying to get home, a few major highways were clogged for a while. But there was never any difficulty getting around our towns before, during or after the eclipse.

Hospitals and other organizations might be less worried about their ability to function the next time there’s a short period of time when the sun hides behind the moon. So there’s no need to cancel surgeries or set aside emergency shelters for staff members unable to commute.

The local trash service shifted its pickup schedule by one day, extending into Saturday, because of the eclipse. That turned to be unnecessary, except as a way to give employees a chance to sit and watch the sky with everybody else.

Chances are, however, that the experience of Monday won’t do anybody any good. Nobody will remember it by the time the next total eclipse is visible in these parts.

As I understand it, the next total eclipse visible in any part of the United States will come on April 8, 2024, but we won’t see it here as it slices across the nation from Texas to the Northeast. We won’t see the next one after that either, those of us still alive. It will happen on Aug. 12, 2045, and be visible from Northern California to Florida.

What will I remember from Monday? I was riding my bike in town, for no good reason other than that I wanted to say I’d done it. So what I’ll remember is that when it got dark briefly — or kind of dark anyway — I switched on the tail light on my bike. (hh)


15 responses to “What we learned from the eclipse”