What was Corvallis PD doing there? 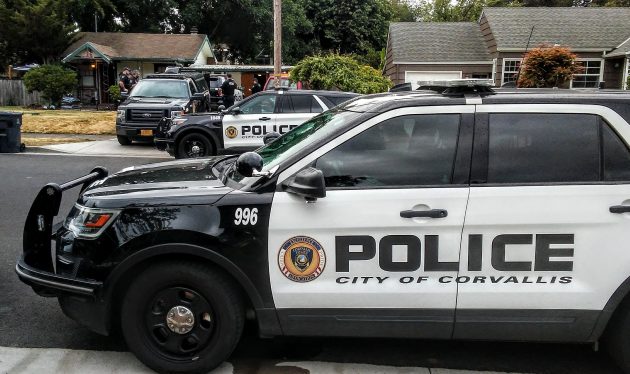 Corvallis police vehicles are parked near the west end of Ninth Avenue about 7:15 p.m. Friday.

On an evening bike ride Friday, I was surprised by the sight of five Corvallis police cars and about as many officers assembled near the west end of Ninth Avenue in Albany.

I remembered what Albany City Manager Peter Troedsson told the council in his Friday summary. His message was that the Albany police, like departments across the country, were having trouble recruiting replacements for officers who were retiring or otherwise leaving, and that this was causing problems.

“Within our own police department, we currently have a 25 percent shortage in patrol,” Troedsson wrote. “At the same time, mental health calls are on the rise.  On June 8, we had four calls on one individual that tied up multiple resources. He was eventually committed to the hospital but was quickly released.  The increasing mental health calls and decreased police staffing are further straining patrol staff.  We’re working with partners at Linn and Benton County Mental Health and Samaritan hospitals to try to address the increased volume of calls.”

With that in mind, and because one of the Corvallis units was a community service vehicle, I thought that perhaps Albany had called on mutual aid from Corvallis because of some particular case.

No, the Corvallis officer I spoke with at the scene told me, it was nothing like that.

Instead, he said his department had been investigating something in Corvallis, and the investigation led to Albany. He wasn’t free to discuss the case or disclose details.

Anyhow, it was NOT a case of the neighboring department sending people to Albany to respond to a call for service because the APD was short of personnel. (hh)


7 responses to “What was Corvallis PD doing there?”