What to do about taggers 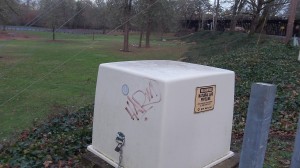 At the edge of Bryant Park.

In Albany, now would be as good a time as any to wipe off or paint over the graffiti that have started to show up here and there along one of my bike routes and possibly elsewhere. Tagging is likely to get out of hand if we don’t.
Lt. Casey Dorland of the police department tells me that Albany is fortunate in having only a “very limited gang-affiliated graffiti issue.” Still, he says, police investigate when graffiti appear, taking photos for future use so that a suspect, if and when discovered, might be properly charged. 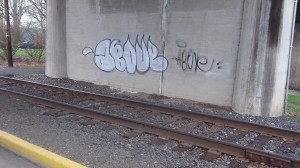 Under the Willamette River bridges.

Cleanup falls on the property owners, public or private, but in circumstances where extra help is needed, such as when a property is overwhelmed by taggers, a community service officer in the department can coordinate volunteer help or donations.

“It’s very important,” Dorland says in an email, “that graffiti be reported and cleaned or removed as soon as possible.” It would even better to prevent it by keeping an eye out. The police suggest taking a cell phone photo or video, from a safe distance, if you see someone going to work on a wall with a spray can. That’s going to be rare, though, since this work takes place mostly in the dark when no one likely to be critical is around to watch.

As cold as it’s been, you’d think taggers would stay indoors, or that their paint would freeze and refuse to come out of the can. Evidently it’s not been cold enough. (hh)


One response to “What to do about taggers”