What they call the pope 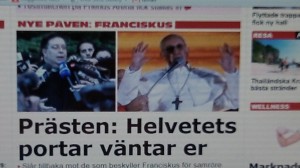 We have been told in the press that the new pope’s name is simply Francis. No Roman numeral behind it, like Francis I. But that’s not strictly correct, is it? Francis is not the name he took. He took the name Franciscus, after the 13th century Italian who took a vow of poverty, founded the Franciscan Order and was canonized as a saint a few years after his death.

English speakers are not the only people in the world who have renamed both the saint and the pope in their own language, or at least adopted their own spelling. To the French, the pope is Francois. To the Germans he’s Franziskus, although at least one paper there called him simply Franz. In Spain and in his native Argentina, he is Francisco, of course. In Rome itself, they call him Francesco. In mostly Lutheran Sweden, the name is Franciskus, and in Poland it’s spelled Franciszka.

This divergence is at least a little odd, isn’t it? People’s names normally stay the same regardless of the language. Well, most do. Francis is one of the exceptions. The pope has already proved that he is a humble man. He started his papacy by wishing the crowd a good evening, and later he joined his fellow cardinals on the bus back to their quarters rather than taking a limousine. Informal. That’s great, but perhaps we had better not go too far and call him Frank. (hh)