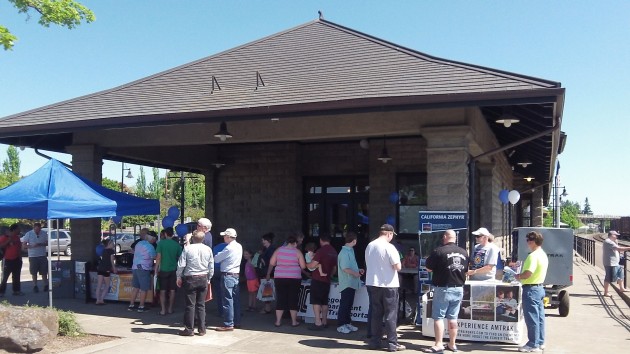 Those empty brackets on the roof used to hold a sign telling northbound train passengers where they had arrived.

All those people milling about Albany Station for Railroad Day last weekend didn’t need a sign to know where they were. Good thing, too, because the station sign on the roof had evidently disappeared.

The sign was kind of historic because like the one that still sits on the roof on the other side, it evoked the days of the Southern Pacific when stations along the line were identified partly by their distance from headquarters in San Francisco. (I can’t remember if the sign itself is historic, meaning genuine and old, or whether it was recreated when the station was renovated in the 1990s.) 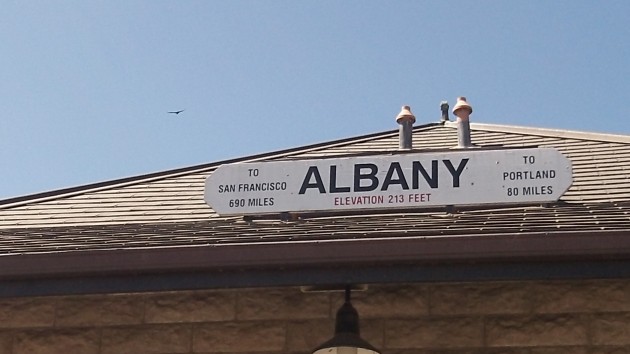 I noticed the roof sign on the west side missing when I was snapping some shots during the Railroad Day event at Albany Station last Saturday, and I wondered what happened to it and where it went.

The city of Albany owns the station. But the city officials I asked didn’t know anything about it. “I talked with our building maintenance lead worker and he didn’t take it down,” said Chris Bailey, the director of public works operations. “It could have blown off or rotted and fallen off, we don’t know.  He is going to look for a picture to reference and have another one made.”

He won’t have to look far for a picture. If I remember right, the two roof signs were the same, and as of Wednesday, the one on the other side was still there. (hh)