What developer envisions in NA 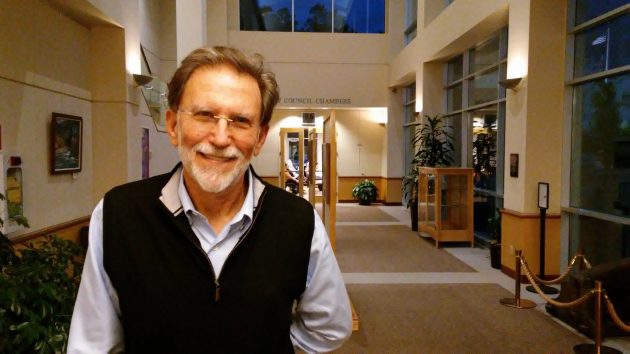 Jim Winkler, the developer seeking to rezone five parcels he owns in North Albany, at City Hall during Wednesday’s hearing.

Jim Winkler would like to show the Albany City Council his concept of what he wants to develop on about 12 acres he owns north of Hickory Street in North Albany. But he says a Portland fire crashed the computer server on which the presentation was stored, so the council at his request on Wednesday continued a public hearing on rezoning his land.

It’s not necessary in a rezoning case to submit a development plan, and Winkler has not done so. But he says he’d like to give the council an idea to counteract mistaken speculation about what the rezoning might cause to be built.

More than a dozen people signed up or spoke against the rezoning of five parcels from medium-density residential (RM) to mixed use commercial (MUC). The land is at the north end of Pleasant View Way, west of the North Pointe neighborhood and south of the rail line used by the Portland & Western. The planning commission had turned down the Winkler request, and the North Albany neighbors urged the council to deny it too.

The opponents talked of many things, such as crowded schools, traffic, property values, and even potential floods. As far as I heard, they didn’t talk much about the criteria by which the city code says rezoning requests should be judged. The planning staff had recommended in favor of the request because the rezoning meets all the necessary tests, including that it fulfills the goals of the comprehensive plan.

Winkler, of Portland, says his Albany site is an ideal location for the kind of development he wants, a mixed-generational community of affordable workplace housing along with senior apartments. Families would have day care or a medical clinic right there. It would be a place for residents who like to walk or ride bikes and could do more of both because services would be on the premises or nearby.

A new supermarket and hardware store are being planned in the North Albany Village Center just to the west of his property. When I chatted with Winkler while the hearing was going on, he told me he understood the market now plans to open in September. No matter when it opens, no doubt the company planning the store would welcome another 300 families within walking distance.

The existing zoning allows the owner to build more than 300 conventional apartments, roughly the number Winkler has in mind for his concept too. He wants the MUC zone because it apparently allows greater flexibility in laying out the place — somewhat smaller units, less setbacks, and a building height of 50 feet, 5 feet taller than allowed now.

Planner David Martineau told the council that by Wednesday afternoon, the city had received 11 written comments and a petition with 158 signatures against the rezoning. There are 170 property owners within 1,000 feet the property at issue.

The city will notify neighbors when a date for the continued hearing is set. (hh) 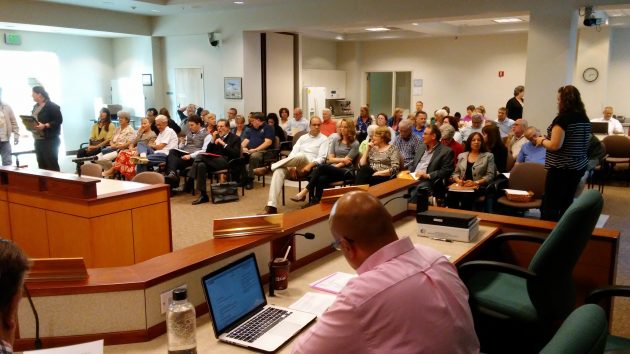 The Albany council chamber was filling before Wednesday’s meeting, mostly with people there for the Winkler rezoning hearing. (That’s Assistant City Manager Jorge Salinas in the foreground.)

15 responses to “What developer envisions in NA”