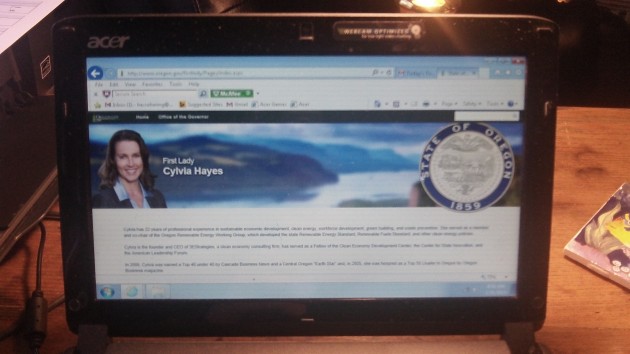 Cylvia Hayes on the governor’s website before the “first lady” part of the site was scrubbed.

Cylvia Hayes’ was throwing her weight around as “first lady,” as reported by The Oregonian/OregonLive, because she wanted Oregon to adopt a new way to measure changes in the economy. Most of us had never heard of the “Genuine Progress Indicator.” But thanks to Google you can look it up. It sounds like a ploy by people in government and academia to get paid for gathering data, making plans, holding meetings and writing reports.

To promote this scheme, Governor Kitzhaber urged the director of the Department of Administrative Services to find a job for one Sean McGuire, a former Maryland state official in charge of GPI there. Last spring Oregon did hire him for a year at about $65,000. This was after Hayes was paid $25,000 by Demos, a New York advocacy group whose motto is “An equal say and equal chance for all,” to promote GPI in Oregon.

The Demos website has an article titled “Implementing GPI in Vermont, Maryland and Oregon.” It explains that GPI “includes 26 indicators to give a broader picture of the sustainability of growth.” The indicators include items such as “income inequality,” “services of consumer durables” (whatever that means), “cost of ozone depletion,” “cost of net wetlands change,” “value of volunteer work,” “value of housework,” “cost of family changes,” and “cost of commuting.” None of those are easy to calculate, and a composite GPI containing these and all the indicators, all 26 of them, does not really tell you anything useful.

Oregon tried something similar in 1989 under Governor Goldschmidt, when the state formed the Oregon Progress Board and started measuring more than 100 different things. It was an effort at making government more purposeful and scientific, the dream of all central planners. After 20 years of this, the 2009 legislature stopped funding the program, and it petered out. The result? Nothing but 20 years of salaries paid to people who gathered data and wrote reports, and that was it. (The one-time chief of the program, a likable guy named Jeff Tryens, departed for Australia and later landed a job for the city of New York.)

As for Kitzhaber, his first lady and GPI, we’ll see how it turns out. Most Democrats love this kind of central planning exercise, and their big majorities in Salem may throw some money at this one, if only to keep Kitzhaber’s lady happy and keep consultants employed. (hh) 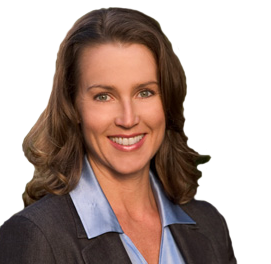 Here’s what Oregon’s chief advocate of the Genuine Progress Indicator says. As “Oregon’s first lady,” Cylvia Hayes was quoted on the Demos website: “You can’t effectively govern a state in a two-year biennial budget cycle… As a person in the sustainable development field you have two problems. One is, we’re measuring the wrong thing, and two, you’re measuring things on such a short time horizon that you can’t actually see the full costs and benefits of policy decisions. So we’re integrating the GPI with a ten-year budget plan outcomes metric and then begin to make explicit what our policy and state budget decisions will mean to all three capital accounts (our physical capital, human capital and environmental capital)…. The intent in Oregon is to use the GPI to craft the state budget. Oregon has a long history of working up alternative metrics we had the Oregon Progress Board… but one of the reasons it didn’t move the dial is because it wasn’t attached to state policy decisions and state budget decisions… We worked with a group of graduate students and an ecological economist at Portland State University. We have a rudimentary GPI, now we are hiring a person to oversee the implementation of GPI. The first part of that will be updating the GPI, making it more rigorous.”

I don’t know about you, but it sounds like so much mush to me. (hh)