What corona may do to this library 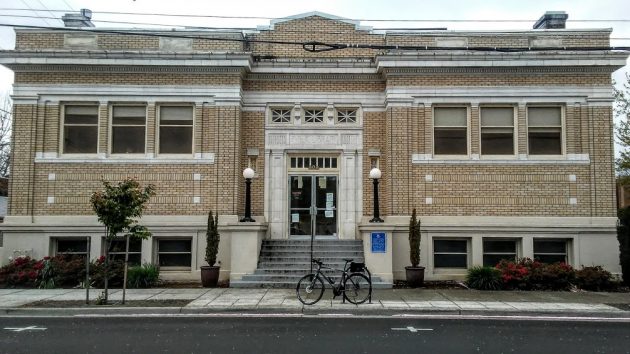 The Carnegie Library in downtown Albany — closed — as it looked on April 22.

Like a lot of other places, Albany’s two public libraries have been closed to the public since mid-March. The library director says they’ll stay closed at least until the governor lifts her “stay-home” order. This may have one of two possible results.

One is that the closure will prove just how crucial the libraries are to our lives as a community and individual citizens. As for me, I’m climbing the walls because I can’t check out books. The ones I got just before the closure turned out to be duds.

I’ve read one of them — fought my way through its chirpy prose until I gave up and skipped to the end. The other two proved pretty much unreadable, even in these dire circumstances.

I wish the libraries had given us a couple days notice that they would close indefinitely. We could have emptied the shelves in anticipation of a long drought.

The other possible result? Some people, including some on the city council, might be proved right in their contention that library buildings are no longer needed. After all, the Albany library staff has assembled an amazing array of substitutes for regular operations. There’s a long list of online offerings for adults and children, from e-books to all kinds of databases and electronic story times.

Library Director Eric Ikenouye told me on April 21 that before the coronavirus outbreak, the system’s two buildings had an average of 1,000 people a day come through the doors. Maybe many of these patrons have now found that the online offerings work for them, that they don’t need the buildings to be open any more.

I hope this is not the case. I hope I’m not the only one for whom regular visits to the local public library are an essential routine.

But if it is the case, the fate of the downtown Carnegie branch may be sealed. The city administration is looking at steep declines in revenue because of the governor’s corona shutdown. This will cause trouble during the rest of  the current biennium and sharpen the projected shortfall in the next.

Closing the Carnegie branch was one of the alternatives the council considered before and may be forced to consider again. It would not save much money. But the proponents of this cut, however small, could say: “Look, you got along without it for months and survived, so …”

Surviving? Yeah, in a literal sense. So far anyway. But it would be a much poorer life if my favorite (and conveniently located) library had to stay shut. (hh)


28 responses to “What corona may do to this library”