What about that ‘east anchor’? – Hasso Hering

What about that ‘east anchor’? 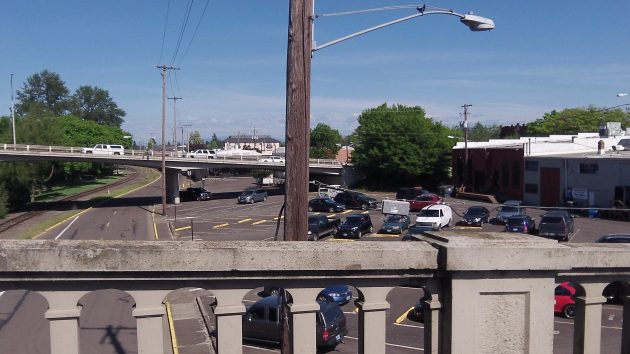 This is where a downtown plan envisions some kind of development.

Five years ago, an update of Albany’s downtown plan called for two “anchors” to help revitalize the central area. On the west end, there would be the Albany Carousel, now under construction. On the opposite end, there would be an unspecified “east anchor” on the south side of Water Avenue between the Willamette River bridges. It’s still a city-owned parking lot, though, and nothing else has come up.

The east and west anchors were part of the “retail refinement plan” commissioned in 2011 for the Central Albany Revitalization Area, the downtown urban renewal district. The plan by long-time CARA consultant George Crandall and his firm called for several big private and public developments, but only the carousel is becoming a reality so far. As for the east anchor, the 2011 plan envisioned it as “a major development opportunity site, ideally suited for a high retail traffic generator along the Ellsworth/Lyon corridor.”

To help with the idea of the east anchor, city officials once proposed a “slip lane” that would allow drivers to get to Water Avenue from the right lane of one-way Lyon Street before having to head across the river. But ODOT discouraged this idea.

What about the east anchor now, I asked Kate Porsche, the city’s urban renewal manager and economic development director. Her emailed reply: “We are still exploring the idea and working to understand if it’s a viable site and how it would function without the slip lane. To that end, one or two of the U of O classes this year may work on looking at that site as part of their work for the SCI program. We’re still firming up and matching courses to projects so I don’t yet know what exactly this will look like.”

SCI stands for the University of Oregon’s Sustainable Cities Initiative, a program that pairs students and faculty with local governments that want help with projects. Albany has agreed to take part in the program this coming academic year.

So as you can see, the idea of downtown Albany’s east anchor has not advanced since being proposed five years ago, and unless something happens the site likely will remain a parking lot for a while. (hh)

The Refinement Plan map showed the anchors as “A.”

16 responses to “What about that ‘east anchor’?”